Size750mL Proof80 (40% ABV)
This Calvados is crafted with apples from the Pays d'Auge area. The cider rests in oak for a full year before being double-distilled over wood fire. It then spends at least 3 years in Limousin oak, before being bottled at 80 proof.
Notify me when this product is back in stock. 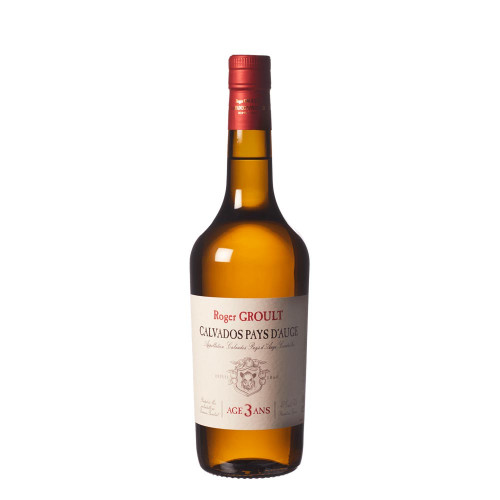 The Calvados Roger Grout is a family distillery in the heart of Pays d'Auge, Normandy, France. Led by Jean-Roger Groult, the family has been producing Calvados for 5 generations. The spirit is traditionally crafted in the region by double-distilling cider.

The history of the distillery dates back to the 19th century when the family farm was producing apples and cider. In 1860, Pierre Groult began distilling the cider into a brandy that rapidly gained reputation due to the favorable terroir. His son massively upgraded the operation with additional orchards, a second aging cellar, and 2 pot stills. The distillery was enlarged again after World War II, with the new aging cellar able to house barrels with over 12,000 liters of liquid in total. Today, Jean-Roger Groult oversees the operation with an international distribution, observing the traditions, while expanding and modernizing the product range.

This Roger Groult Calvados Pays d'Auge is a 3-year-old Calvados that is distilled with 100% cider apples from the Pays d'Auge area. The cider itself is aged in oak for a year before being double-distilled over wood fire, then aged at least 3 years in Limousin oak casks, and finally bottled at 80 proof. Smooth and sweet with intense fresh apple aromas, it has won several awards.

Get your bottle of this Calvados today!

The bright and fresh nose has intense fresh apple aromas with a touch of cream. The palate is sweet with ripe apple, a touch of vanilla, caramel, and tannins. The finish is smooth, fresh, and tannic.