Learn more
Size750mL Proof118.2 (59.1% ABV) *Please note that the ABV of this bottle may vary
Introducing the stunning new Octomore Series. This ninth edition of the heavily peat Islay can definitively debunk the myth that older is better.
Notify me when this product is back in stock. 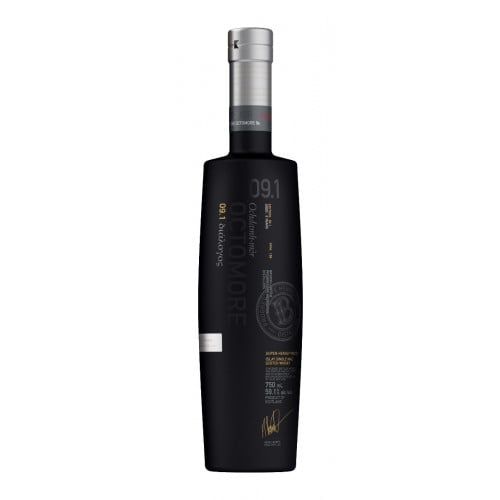 The Octomore farm is situated on the Rhinos of Islay, a remote area nestled high upon a hill, overlooking the village of Port Charlotte. Octomore harkens to the days of stone cold independence during a time when the legality of distilling had just barely entered the era of “enlightenment."

Introducing the ninth incarnation of this heavily peated Islay: Octomore 9.1 Dialogos. Inspired by the Greek concept of conversational exchange, this impressive Islay can definitively debunk the myth that older is better. Distilled in 2012 from 100% Scottish barley, and peated to 156 PPM, Octomore 09.1 is aged in 100% ex-American whiskey casks.

Smoke and oak on the nose with intense sweetness vanilla, and cinder toffee. Thick peat aromas and velvety, vegetal, earthy notes. The palate is soft and nutty, with notes of fudge, nougat, delicate coconut and rose petal floral. The finish is warm and lingering with peat smoke and salted notes.