Size750mL Proof80.2 (40.1% ABV)
Only 861 bottles of this whisky, which was aged for 38 years in Bowmore’s famous number one vault, were produced.
Notify me when this product is back in stock. 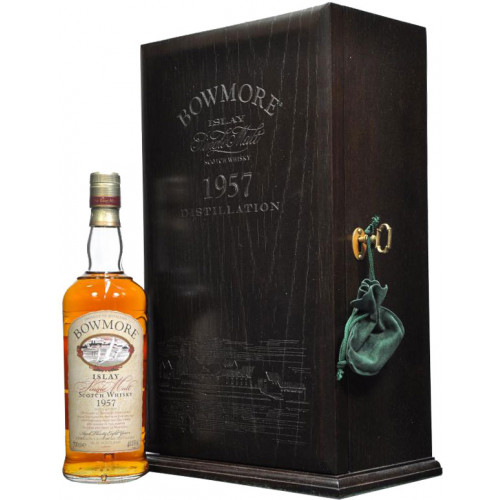 Situated along the shores of Long Indaal, Bowmore Distillery was founded in 1779 by John Simpson. The distillery is the oldest distillery on the island of Islay and the second oldest in Scotland. Its unique location — Long Indaal suffers from steady gusts of wind and strong eddies that make its waters especially hazardous — plays an integral part in defining the lush, rich character of the single malt whisky it produces.

Bowmore Single Malt Scotch Whisky is made from barley that has been expertly cultivated in the rolling hills of Scotland. Once the barley has been harvested, it is malted and peated at the distillery — Bowmore remains one of the few Scottish distilleries that continues to hand-turn, malt, and peat its own barley. Unlike some other distilleries on Islay, however, the drying process is much shorter at Bowmore — only 15 hours — and utilizes only half as much peat, resulting in a whisky with a robust yet still mild smoky flavor.

After the barley has been malted and peated, it is mashed and fermented with pure water drawn from Laggan River. The water has spent two millennia percolating in the ancient rock formations and peatbogs of Islay, giving Bowmore Whiskey its distinctive, chewy body and supple mouthfeel. Then, the fermented barley is twice distilled through Bowmore's copper-pot stills before being left to mature in the distillery's seaside, underground maturation vaults.

Bowmore 38 was distilled on January 14th, 1957, and was promptly moved to casks in the distillery’s famous number one vault. Carefully watched over for 38 long years, the whisky was bottled in the mid-1990s to preserve the 40.1% ABV. This legendary bottle is housed within a handmade oak case crafted by the master cabinet makers of Charles Kirkby & Sons in Sheffield, England.

Bowmore 38 has a complex aroma of passionfruit, shoe polish, pineapple rinds and fresh herbs, which leads to a palate accented by wine tannins, eucalyptus and mushrooms. The finish is exquisite, with light smoke, beeswax and dried figs coming together beautifully.

Only 861 bottles of this whisky were ever produced — pick up a bottle today!

Complex aroma of passionfruit, shoe polish, pineapple rinds and fresh herbs, which leads to a palate accented by wine tannins, eucalyptus and mushrooms. The finish is exquisite, with light smoke, beeswax and dried figs coming together beautifully.