Learn more
Size750mL Proof32 (16% ABV) *Please note that the ABV of this bottle may vary
The folks at the re-launched Boone County Distilling like to pay tribute to the distillery's and region's rich history. This expression is crafted with their Small Batch Bourbon and rich alabaster cream in a nod to Lewis Loder, who like to serve bourbon over ice cream at the White Hall Tavern in the late 1800s.
Notify me when this product is back in stock. 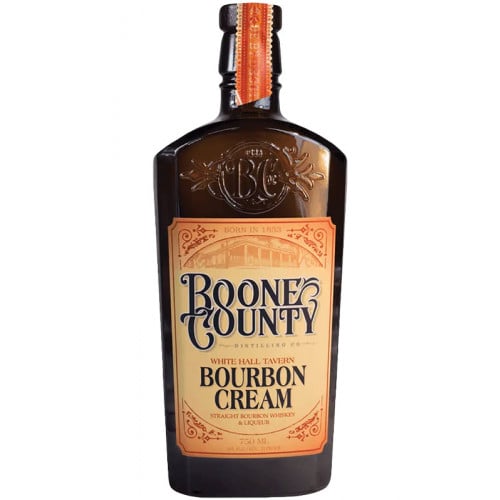 Boone County Distilling is a re-launch of what was at one point in time the largest distillery in Kentucky. When the distillery re-opened in 2015 after nearly a century, Jack Wells and Josh Quinn were sure to pay tribute to its rich history. Boone County White Hall Tavern Bourbon Cream pays tribute to Lewis Loder, a Justice of Peace who ran the White Hall Tavern in Petersburg, Kentucky. Loder was a fan of local bourbon, poured over hand-turned ice cream. This expression is crafted with Boone County Small Batch Bourbon and rich alabaster cream. Bottled at 32 proof, it's a deliciously creamy drink that goes especially well with ice cream or coffee.

Grab a bottle of this rich & creamy expression today!

Almost two centuries later, this is the same pioneering spirit that Boone County Distilling Company now crafts their authentic bourbon in the northern foothills of Kentucky. The brand infused with the stories of those who came before, men like Snyder, Col William Appleton, J.C., Jenkins and James Gaff. Julius Freiberg and Levi Works.
Explore all Boone County bottles >>

The nose is rich and creamy with baking spice notes and nutmeg. The palate is creamy and soft with vanilla, marshmallow, and the bourbon shining through. Look for butterscotch, mascarpone, and a touch of spice on the finish.