Size750mL Proof70 (35% ABV)
This American-made handcrafted vodka is a blend of Blue Ice huckleberry flavored vodka and their Potato Vodka, made from Idaho Russet Burbank potatoes. It's a smooth, crisp, and aromatic spirit that is all-natural, gluten-free, and non-GMO.
Notify me when this product is back in stock. 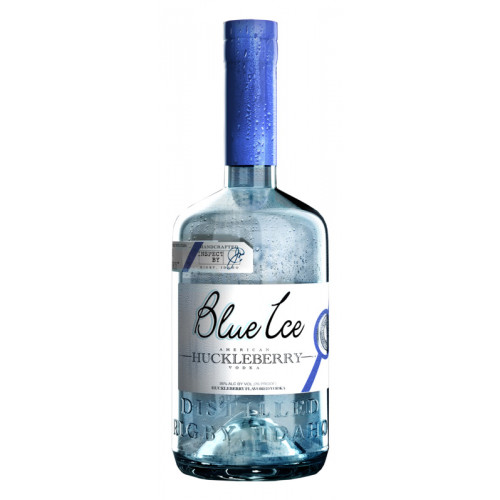 Founded in 2002 by "Big Jim" Myerson, Blue Ice Vodka is a family-owned operation that is focused on producing quality USA-made hand-crafted vodka. Myerson had the vision of creating the spirit using the best American ingredients and found he had to look no further than his home state of Idaho. The region is known for the perfect conditions for growing potatoes, from the climate down to the soil.

The famous Idaho Russet Burbank potatoes would make the finest premium potato vodka, a huge bonus being that the product would be gluten-free as well as non-GMO. Employing a modern four-column still for distillation, each bottle takes nearly 10 pounds of potatoes to produce and is filtered to perfection using a 5-step method. They have since expanded their award-winning range which now includes Blue Ice Potato Vodka, Organic Wheat Vodka, and most recently, Huckleberry Vodka.

Huckleberry is the official state fruit of Idaho, making it the perfect match for Blue Ice. This expression is created by blending their own huckleberry flavored vodka with their potato vodka, making for a smooth, crisp, fruity, and aromatic spirit that is all-natural and all-American. With only 57 calories per ounce, it's an extraordinarily low-calorie option as well.

It's a smooth, crisp, and aromatic profile that opens with ripe berry notes on the nose. There is more fruitiness on the palate with a pleasant tartness and sweetness. Finishes smooth and clean.

4.4 out of 5
(3 reviews)
Write a review
Real email address is required to social networks
Sign in
Login with Google
Login with Facebook
Or
We also recommend