Size750mL Proof80 (40% ABV)
This Breaking Bad inspired vodka is a special edition, inspired by the notorious Heisenberg.
Notify me when this product is back in stock. 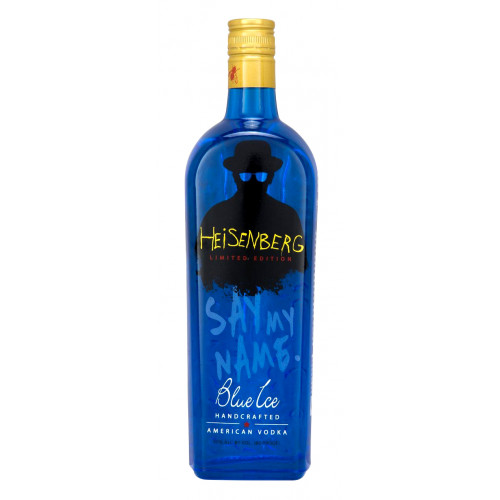 Blue Ice Vodka was founded in Idaho by “Big Jim” Myerson a man with a strong passion for fine wines and spirits that eventually led him to create his own vodka. Blue ice is an award-winning vodka crafted from world’s finest Russet Burbank potatoes. It is made using water from the snow-crested peaks of the Grand Teton Mountains, which gathers in the Snake River Aquifer, naturally filtered through hundreds of feet of porous volcanic rock.

The signature Blue Ice Vodka is distilled in a four-column apparatus via fractal distillation. A process that allows the Master Distiller to control the removal of impurities at a micro level. At this step, the neutral spirit contains no additives, citric acids or glyceride commonly found in most other vodkas.

After a meticulous distillation, the vodka is filtered five times for extreme clarification, passing through fine charcoal, filter press, garnet or crystal, travertine and sub-micron to ensure the utmost clarity. This Breaking Bad inspired vodka is a special edition, inspired by the notorious character Heisenberg in the cult classic, critically-acclaimed series.

Sweet and clean on the nose, this vodka is viscous on the palate with sweet, warming, smooth flavors. The finish is crisp.