Size750mL Proof80 (40% ABV)
“100% corn whiskey, 100% local. Distillation results in a smooth white whiskey with a warm, subtle hint of straight-off-the-cob sweetness.”
Notify me when this product is back in stock. 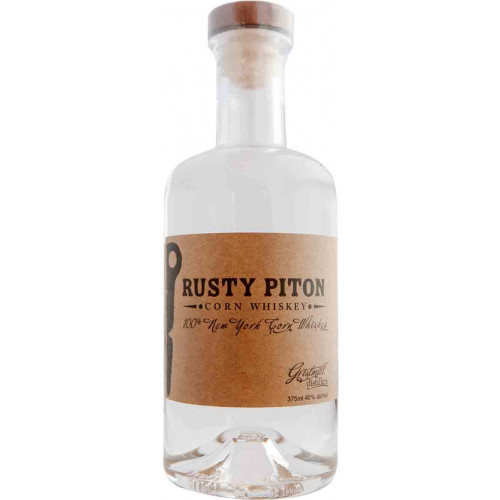 Gristmill encapsulates Upstate New York's rich agricultural heritage. The company, combining their love of whiskey and fresh mountain air, distilled their first spirit, a corn whiskey, at the end of 2014. Rusty Piton Corn Whiskey was released April 2016. Committed to distilling quality brandies and whiskies, Gristmill stresses the importance of local ingredients, using water sourced from a spring within a few paces of their facility. Their corn is grown by Adirondack Organic Grains in nearby Essex. The Adirondack Park, is home to Gristmill Distillers, six million acres of protected land, “designated Forever Wild by the New York State Constitution in 1894.” For over a century, these mountains have been a haven for hikers, climbers, cyclists, fishermen, and skiers.

Gristmill’s Fly Piton Corn Whiskey is named after the local black flies that inhabit the area:

Rusty Piton is also an homage to the rock climbers and mountaineers, and their steel pitons that they hammered into the mountain side for protection as they made their ascent. “The name was born of a winter day ice climbing with friends at Silver Lake, an area of cliffs and ice here in the Adirondacks” (Gristmill Distillers). Bottled at 40% ABV this white whiskey is sweet on the nose, with a warm, subtle hint of straight-off-the-cob sweetness.

Pick up your bottle of Rusty Piton today!

Very sweet on the nose. The palate is creamy and smooth with a warm, subtle hint of straight-off-the-cob sweetness, fruit, and a dark chocolate finish.