Size750mL Proof90 (45% ABV)
Following in the footsteps of the legendary Bhakta 50 release, this unique brandy is a combination of AOC calvados (90%) and armagnac (10%) aged between 7 and 27 years. The singular expression is finished in Islay whisky casks.
Notify me when this product is back in stock. 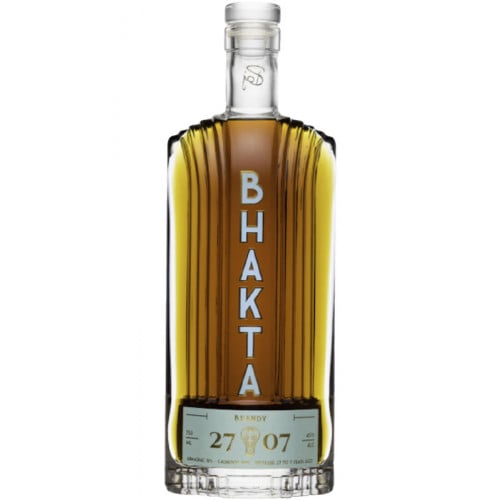 Released in 2020, Bhakta 50 is a blend of some of the rarest spirits in the world. It's a blend of 8 armagnac vintages, aged between a whopping 50 and 152 years. The blend was finished in Islay Scotch casks, imparting a gentle smokiness to the exquisite spirit. With 38 barrels in total, Bhakta is released barrel by barrel, ensuring each release is a collector's item as well as a unique drinking experience.

Following the release of Bhakta 50, Raj set upon delivering a more accessible, younger brother to the monumental release. Bhakta 27-07 is a unique blend of AOC calvados (90%) and armagnac (10%) aged between 7 and 27 years, the average age being 18. Just like its older brother, the spirit is finished in Islay whisky casks.

Get your bottle of this truly unique brandy today!

Raj Peter Bhakta is many things: an entrepreneur, a political candidate, even a reality show contestant. He founded WhistlePig in 2007, eventually selling it in 2019. Then, he set his sights on a fresh project, embarking on a quest to find something rare and exquisite ― a venture that would shake up the spirits industry. In France, he discovered a cellar, filled with armagnacs that were distilled between 1868 and 1970. He envisioned an ancient brandy, tailored to the tastes of whiskey lovers. Thus, Bhakta 50 was born.
Explore all Bhakta Spirits bottles >>

The profile features a unique balance of autumnal, floral, and smoky notes with apple, caramel, oak, and hints of peat on the nose. The palate is fruity, oaky, and spicy with dark fruit, cinnamon, and clove. The finish is satisfyingly long with a balance of apple and smoke notes.