Caskers Rewards members earn up to 4 store points back when buying this bottle.
Size750mL Proof90 (45% ABV)
This Brazilian gin is crafted with 100% cane neutral spirit that is distilled using a proprietary reverse multi-distillation process that was invented by Master Distiller Joao Fucci. This coffee-infused expression has won a Double Gold Medal at the San Francisco World Spirits Competition.
Notify me when this product is back in stock. 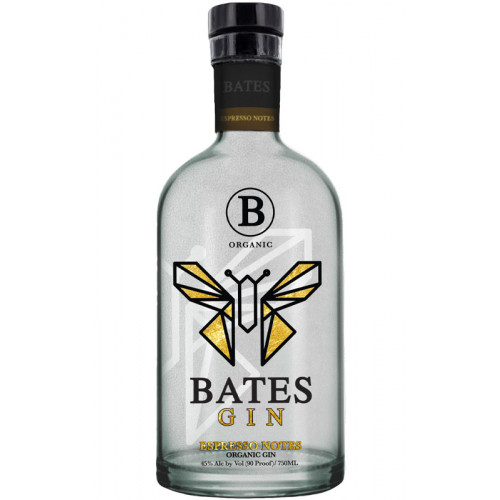 Henry Walter Bates was a prominent naturalist credited with giving the first scientific account of mimicry in animals, later named "Batesian mimicry". Being an avid explorer, Bates went on a journey to the Brazilian Amazon Rainforest in 1848. During his 11 years there, he studied a plethora of life forms, creating a collection of more than 500 different butterflies. His work would become a major part of Darwin's Theory of Evolution, and would inspire much more than that ― including Bates Gin, a brand that celebrates the explorer and naturalist. As a tribute to the man, the butterfly was chosen as the symbol of Bates Gin.

Bates Gin is crafted with many botanicals from the Brazilian Rainforest. These include juniper berries, organic pink pepper, fennel, cardamom, Brazilian nuts, organic coriander seeds, Tahitian Limon leaves, and nutmeg. The gin is crafted in Brazil using a similarly meticulous scientific approach as Bates would have used in his work. The spirit is distilled using a proprietary multi-distillation process that was invented by Master Distiller Joao Fucci. The purest 100% cane neutral spirit is distilled from organic Brazilian sugar cane and serves as the base for the gin. The spirit is then blended with the botanicals, resulting in an aromatic modern gin.

Joao Fucci is a master distiller with over 3 decades of experience. His reverse multi-distillation process involves a whopping 27 carefully-controlled distillations, giving him total control of the spirit produced. Currently, there are 2 expressions in the Bates Gin lineup: the Organic Gin and Bates Gin Espresso Notes. Brazil is the world's leading producer of coffee, meaning that only the finest organic coffee beans are blended with Bates Gin for the Espresso Notes expression. Organic tangerine peel and juice are added for additional zesty and citrusy notes that elevate this 90-proof gin. It has won the coveted Double Gold Medal at the San Francisco World Spirits Competition in 2021.

Get your bottle of this coffee-infused Brazilian gin today!

This gin is fresh and bright yet complex with coffee, citrus, and juniper on the nose. The palate is bright and zesty with fresh tangerine. Look for richness and depth in the form of roasted coffee bean notes that linger through the finish.