Size750mL Proof90 (45% ABV) each
Made using raw, organic Vermont honey, these spirits are a celebration of one farmer's special connection to the land.
Notify me when this product is back in stock. 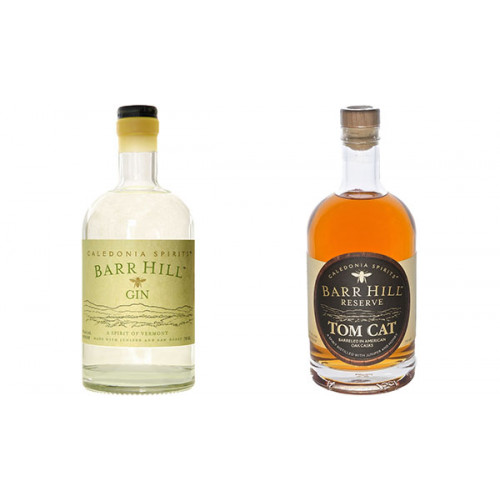 Barr Hill Gin is a London dry-style gin that, unlike other gins, uses only one botanical during distillation — juniper.  The rest of its complex, gentle flavor profile comes from the raw honey, which is added during a second distillation. "Honey is incredibly expensive to harvest," Hardie notes, and harder still to ferment. "Even with a Bachelor's of Science in agriculture, I didn't know that the way you're taking care of your bees and your people goes into every product — every bottle,"he says. "With a strict science background, they don't teach you that, but it's true. The consumer will know the difference between a good and a mediocre product."

Following distillation, which occurs in a 25-gallon recycled stainless steel still (a testament to Hardie's commitment to environmental sustainability), the gin is bottled and sealed with beeswax (what else did you expect?) cut from a huge hunk of luminous lemon-yellow wax from Singing Cedar Apiaries. Barr Hill Gin has touches of juniper and ginger, which are accented by notes of sweet honey. The gin earned the Double Gold Medal at the 2012 New York International Spirits Competition.

Barr Hill Tom Cat Reserve is crafted by maturing Barr Hill Gin for three to four months in new American oak casks. "While resting in the barrels, the gin is constantly transforming," says Hardie. "The charred barrels contribute to the brown color of the spirit and give our Barr Hill Reserve Tom Cat its complex flavor." Tom Cat Reserve has also has notes of juniper and ginger, but has touches of caramel, vanilla and honey that are robust and bountiful.

"The best fertilizer is always the footprint of a farmer,"Hardie says.  These spirits have his footprint all over them.

Gin: Round and viscous on the palate, with notes of juniper and honey lingering on the finish.