Learn more
Size500mL Proof88 (44% ABV) *Please note that the ABV of this bottle may vary
The Glasgow Distillery Company’s Banditti Club Glasgow spiced rum is made using Madeira-sourced rum, which is aged for up to 12 months in oak casks, and spiced with fresh tropical fruit and exotic spices. This premium rum bagged a Gold at the 2020 London Spirits Competition.
Notify me when this product is back in stock. 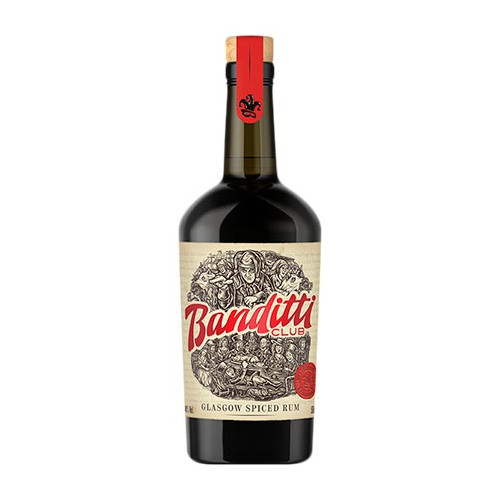 The Glasgow Distillery Company’s Banditti Club rum is named after a company of bold rogues who would meet in Glasgow’s local public houses. Their favorite pastimes included drinking, eating, singing, and paying a club compliment to the local police, which commonly involved the upturning of the police box within which the Charley sat, and trapping them inside. The Glasgow team created a rum that perfectly captures the energy, passion and vitality of the original Banditti Club.

Banditti Club is made using rum distilled from freshly pressed sugar cane juice on the Island of Madeira. In Glasgow, the rum is aged for up to 12 months in heavily charred virgin oak casks, and spiced with a selection of fresh tropical fruit and exotic spices, including pineapple, orange, cacao and allspice. The Glasgow Spiced Rum is a 100% natural product, bottled without any added coloring, flavoring or sugar.

When The Glasgow Distillery Company opened in 2014, it became the first single malt whisky distillery in Glasgow for over 100 years. Named after one of Glasgow’s original distilleries, which was founded at Dundashill in 1770 and closed at the beginning of the 20th century, The Glasgow Distillery Company embraces the pioneering spirit of Scotland’s first licensed distillers. The founders, Liam Hughes, Mike Hayward and Ian McDougall, are on a mission to bring single malt distilling back to the city, and hope that their venture marks the start of a whole new age of distilling in Glasgow. Committed to authenticity and quality, the distillery’s innovative and skilled team uses the finest ingredients, the best distilling equipment, and best casks from around the world to make a wide portfolio of handcrafted premium spirits. Their whisky, gin, rum and vodka are distilled in five copper pot stills, Annie, Mhairi, Tara, Margaret and Frances. Attention to detail and the superb craft that go into their products have already earned the company a number of awards from international spirits competitions.
Explore all Banditti Club Rum bottles >>

The nose opens with tropical fruits and warming spice, and herbal notes complementing sweet vanilla and clove. Toasted pineapple with allspice and ginger prevail on the palate, with hints of cinnamon, orange and anise. The finish is long and peppery, with a complex clove spiciness.