Learn more
Size750mL Proof90 (45% ABV) *Please note that the ABV of this bottle may vary
This unique Canadian whisky, which won Double Gold at the 2015 San Francisco World Spirits Competition, is made from 91% rye, 8% bourbon and 1% sherry.
Notify me when this product is back in stock. 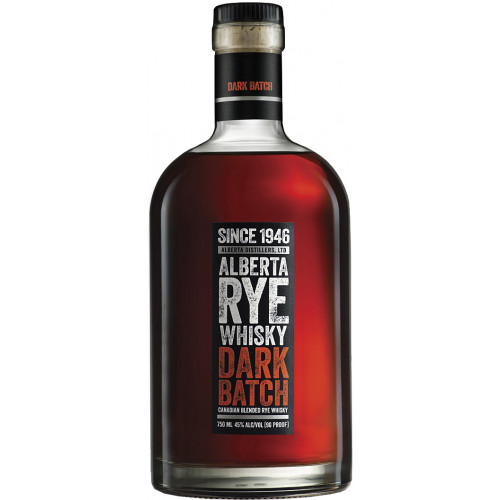 Founded in 1946 by rural entrepreneurs Max Bell and Frank McMahon, who affectionately referred to themselves as, “Prairie boys,” Alberta Distillers Ltd. has since grown into one of Canada’s premiere rye producers — despite the company’s growth, however, the distillery’s local roots are still evident today. Most of the rye grains used by Alberta Distillers is sourced from farmers in Alberta, Saskatchewan and Manitoba, with the farmers still delivering the grains personally by truck.

While much of the rye produced today is exported around the world to be used in blends or private label bottlings, Alberta Distillers distills and bottles its own whisky under the Alberta Distillers name. Famous for its Alberta Premium Whisky, a unique Canadian whisky with 100% rye grains in the mashbill, Alberta Distillers is pushing the envelope once again with its brand-new Alberta Rye Whisky Dark Batch.

Alberta Rye Whisky Dark Batch is made from a mingling of 12 year old rye and 6 year old small pot rye, which together comprise 91% of the whisky. The remaining 9% is split between 8% bourbon and 1% sherry, which together round out the whisky’s profile and add both sweetness and complexity.

As a result, Alberta Rye Whisky Dark Batch has an aroma of rye toast, firewood and dark coffee, which leads to notes of vanilla, bitter grapefruit, gingerbread and dark fruits on the palate. The finish is long and spicy, with lasting notes of Eastern spices, licorice and sour candy.

Aroma of rye toast, firewood and dark coffee, which leads to notes of vanilla, bitter grapefruit, gingerbread and dark fruits on the palate. The finish is long and spicy, with lasting notes of Eastern spices, licorice and sour candy.