Size750mL Proof60 (30% ABV)
This vodka is crafted in small batches in Pilot Point, Texas. Distilled 10 times from Midwest and Texas yellow corn, the expression is flavored with lime, resulting in a bright, zesty, and citrusy spirit that's bottled at 60 proof.
Notify me when this product is back in stock. 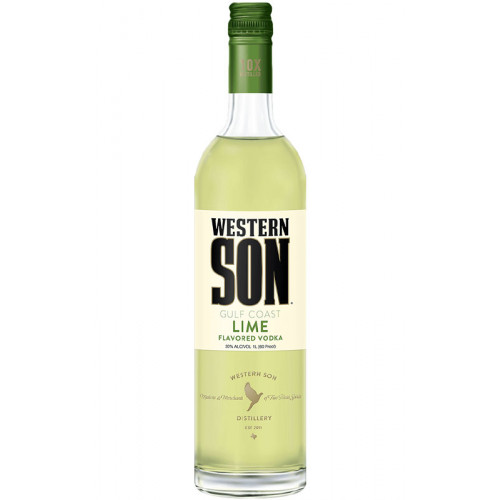 Crafted with small-batch Original Texas Vodka that's distilled 10 times, Western Son has a number of flavored vodka expressions in their lineup that includes lemon, blueberry, watermelon, lime, prickly pear, cucumber, raspberry, peach, and grapefruit vodkas. Western Son Gulf Coast Lime Vodka is bottled at 60 proof and features plenty of zesty citrus aromas with a balance of tartness and sweetness. The flavored vodka has earned a Gold Medal at the SIP Awards in 2018.

Grab your bottle of this zesty vodka today!

The flavored vodka is semi-opaque, the color of freshly-squeezed lime juice. Look for bright, zesty, and citrusy notes with fresh lime and citrus peel notes, as well as a balance of sweetness and acidity.