Size750mL Proof24 (12% ABV)
Rich is a blend of 45% Pinot Noir, 40% Meunier, and 15% Chardonnay. The Champagne was designed to be drunk with ice with a fresh ingredient such as pineapple, grapefruit zest, cucumber, celery, peppers, or tea. These add a unique twist and enhance the wine's flavors. 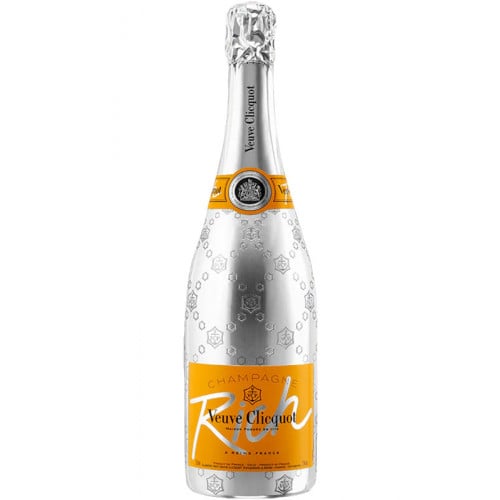 Historically, "rich" was used to describe sweeter champagnes. "Sugar in Champagne is like spices in a recipe: used correctly it can bring out specific aromas and play with flavors," says Veuve Clicquot's Cellar Master. With a dosage of 60g/L, the blend's aromas are enhanced considerably. The blend consists of 45% Pinot Noir, 40% Meunier, and 15% Chardonnay. It was designed to be drunk on the rocks with a fresh ingredient such as pineapple, grapefruit zest, cucumber, celery, peppers, or tea.

Get your bottle of this unique Champagne today!

Fresh and fruity, the Champagne has citrusy and floral aromas with a creamy finish. It's meant to be served on the rocks with a fresh ingredient (pineapple, cucumber, tea...) that enhances its flavors.