Learn more
Size750mL Proof44 (22% ABV) *Please note that the ABV of this bottle may vary
Tuthilltown Cacao Liqueur captures the luscious aromas and flavors of the finest dark chocolate. This liqueur is made with cacao beans from Peru and The Dominican Republic sourced in close collaboration with Fruition Chocolate.
Notify me when this product is back in stock. 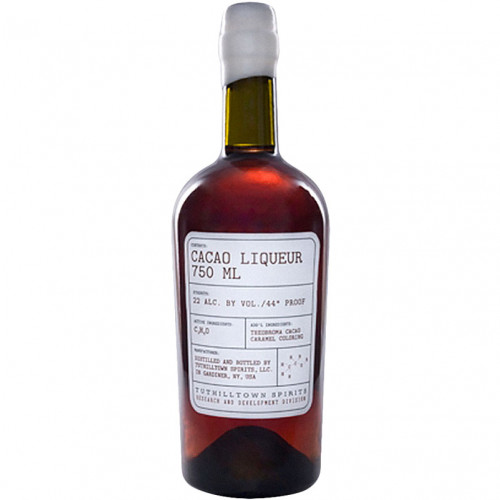 Driven by innovation, collaboration, art, and exploration, and inspired by the bright lights of Broadway, the scenic views of the majestic Hudson Valley, and city's brilliant, creative and resilient people, the distillery turns the high-quality grain from local family farmers into award-winning whiskeys that capture the thrill that is New York. Their endless creativity is also reflected in their gin, apple vodka and various bitters and liqueurs.

Tuthilltown Cacao Liqueur is made with the finest cacao beans from Peru and The Dominican Republic. Tuthilltown Distillery works closely with Fruition Chocolate to directly source the cacao beans, which are roasted, blended, milled and conched to the distillery’s specifications before being distilled to capture the finest flavors and aromas of dark chocolate.