Size750mL Proof82 Proof (41% ABV)
Made specifically for King Edward VII, this liqueur earned a score of 94 points from Tasting Panel Magazine.
Notify me when this product is back in stock. 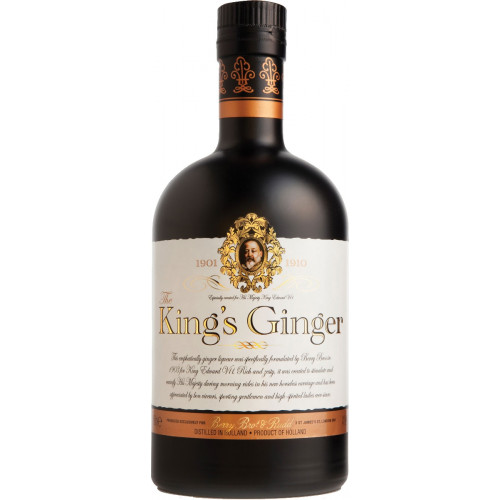 About The King's Ginger Liqueur

In the summer of 1903, King Edward VII could often be found touring the English countryside in his horseless carriage — a topless Daimler. At the time, the King had only recently ascended to the throne. His mother, Queen Victoria, reigned over the United Kingdom for over 63 years — longer than any British monarch other than the current Queen, and the second longest reign by any female monarch in history.

By the time Edward ascended to the throne, he was an ailing 62 years old and his doctor feared the effects that the cold, damp air might have on His Majesty during his morning rides. As a result, his doctor paid a visit to Berry Bros. and Rudd, Britain's oldest and most prestigious wine and spirits merchant (it was established in 1698). Together with Berry Bros., the doctor began experimenting with spirits that the King could enjoy while driving in order to keep him warm and stimulated. Ultimately, the Kings' doctor and Berry Bros. settled on a recipe for The King's Ginger.

"When it first started, it was exclusive to the nobility," says David King, the marketing and strategy director for Berry Bros. Today, the recipe for The King's Ginger calls for macerated ginger roots and lemon oil, which are distilled together with grains in a pot still. After distillation, the liqueur is topped off with single malt Scotch Whisky in order to balance the flavor of the citrus and ginger.

The King's Ginger Liqueur has a warming aroma of ginger, lemon, and maple syrup. On the tongue, the ginger is more sophisticated than the aroma indicates, and slightly mellower rather than edgy. The ginger slowly gives way to hints of citrus and honey, and returns in a long, lingering finish.

The King's Ginger earned a score of 94 points from Tasting Panel Magazine and a Gold Medal at the Beverage Tasting Institute Competition in 2011. Pick up a bottle and try it in a cocktail today!

Aroma of citrus and ginger on the nose. Initial flavor has a soft, gentle ginger bite — more mellow than expected. Ginger slowly fades to hints of citrus and honey, and returns in a long, lingering finish.