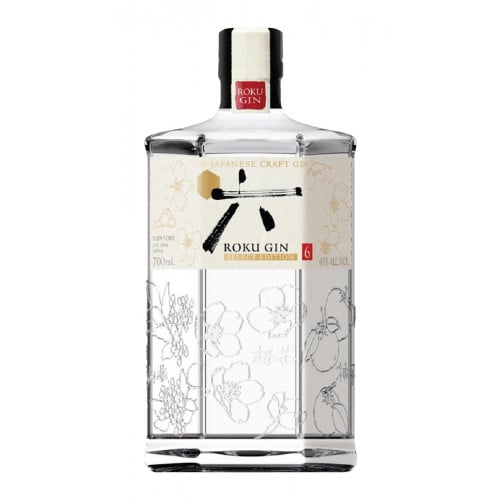 Roku Gin is produced at its Osaka based distillery, by Spirits Giant Beam Suntory. Roku means “six,” named for the six quintessentially Japanese botanicals. Suntory’s take on gin, this Japanese spirit is based on more than a century of knowledge and distilling legacy. After opening his distillery in 1899, founder of Suntory Shinjiro Torii launched Suntory’s first Gin brand —Hermes Gin in 1936. The Suntory name has continued to create world-renowned spirits built on a heritage of distilling.

Roku is a craft gin featuring six Japanese botanicals; sakura flowers and leaves, sencha and gyokuro teas, sansho pepper and yuzu peel. These exquisite and uniquely Japanese ingredients are harvested at their peak during each of the four seasons, capturing the stunning diversity of a Japanese year in a single drop.

The botanicals are vacuum or pot distilled individually capturing the essence of each flavor and preserving the individual characteristics of each botanical. The more delicate botanicals such as cherry blossom, are vacuum distilled in a stainless steel still, while the bolder citrus fruit yuzu is processed in a traditional copper pot still.

These six distillates are then married with the eight signature in botanicals: juniper, coriander, angelica seed and root, cinnamon, cardamom, bitter orange and lemon peel, resulting in a harmonious fusion of traditional gin notes, offset by a distinctively beautiful Japanese twist.

Cherry blossoms on the nose, followed by peppery notes and green tea. The palate continues with notes of herbal tea, and sharp citrus, offset by classic juniper notes. A dry wine tannic finish.