Learn more
Size750mL Proof80 (40% ABV) *Please note that the ABV of this bottle may vary
Premium Ukrainian vodka bets on high-quality ingredients and a traditional recipe.
Notify me when this product is back in stock. 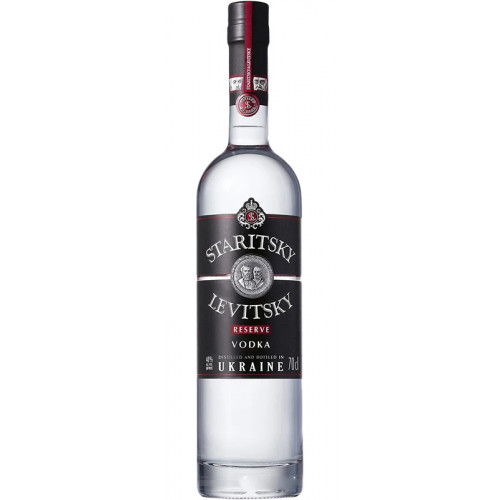 Staritsky Levitsky Reserve Vodka is a subtle, refined dram that celebrates heritage and history. It's distilled in the ancient Ukrainian town of Lviv, using premium grains from the local black earth and crystalline spring water from the Carpathian Mountains. Its unmistakably sophisticated character was conjured up a century ago when a local distiller came up with the secret recipe. To make each batch as fine as possible, Master Distiller creates a new blend, distills it five times, and purifies it four times. Then, vodka rests in stainless steel tanks for a month to get a full-bodied character.

Staritsky Levitsky bets on tradition and authenticity, and Lviv is the perfect place to make high-quality vodka. Not just for its closeness to Carpathian spring water and unique grains, but also for its heritage of making vodka. (The first distillery in the town opened in 1782!) And the name? Staritsky was a cultural leader, and Levitsky was an entrepreneur; both helped Lviv become one of the Habsburg empire's most important cultural and economic cities.

This exquisite vodka offers a clean and subtle aroma of freshly-cut grass and balanced notes of spices and pepper on the palate before it concludes with rye and extra pepper.