Size750mL Proof80 (40% ABV)
This a newly-launched vodka — from one of America’s oldest and most creative craft distilleries — is made in California with fresh and local Valencia, Seville and bergamot oranges.
Notify me when this product is back in stock. 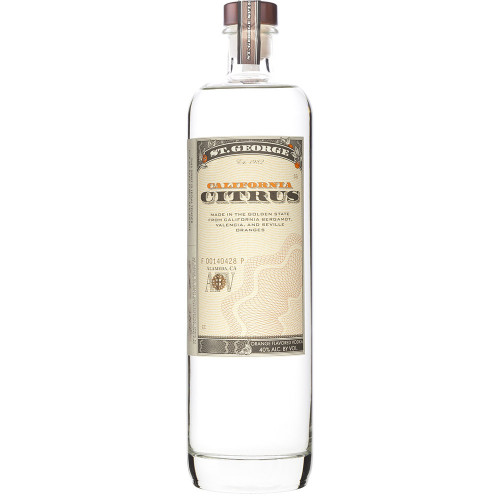 Winters, who is widely-known for experimenting with different types of spirits, has a laboratory dominated by a 10-liter test still in addition to the glass beakers and graduated cylinders that cover every inch of counter space. Next to the dusty chalkboards caked with equations for the conversion of sugar to alcohol and intricate diagrams of molecular structures are bottles of experimental whiskies, vodkas and even an aging balsamic vinegar (it's 14 years old already).

St. George California Citrus Vodka is a newly-launched vodka from one of America’s most creative craft distilleries. The distillery sources fresh Valencia, Seville and bergamot oranges from local farmers and ranchers, infusing the flavors into three separate non-GMO spirits. The three distillates are then blended together and filtered to remove visible impurities before bottling.

As a result, St. George California Citrus Vodka has a lemony scent on the nose, which leads to a robust palate filled with bright notes of orange peel and pomelo. The finish is slightly sweet, with flavors reminiscent of orange groves and other citrus plants.

Lemony scent on the nose, which leads to a robust palate filled with bright notes of orange peel and pomelo. The finish is slightly sweet, with flavors reminiscent of orange groves and other citrus plants.