Size750mL Proof86 (43% ABV)
This pot-still vodka is crafted using organic, California-grown Hard Red Winter Wheat.
Notify me when this product is back in stock. 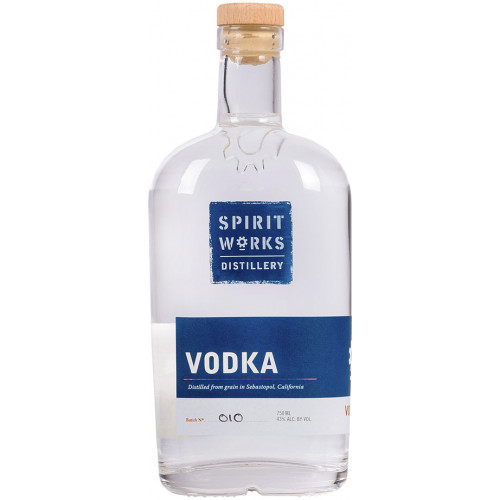 Spirit Works Distillery was founded by Timo and Ashby Marshall who, after a decade of working together for environment non-profits, decided to leverage their family heritage — Timo’s family, which hails from a small village in England, has been perfecting its sloe gin recipe for generations — as well as their unique environmental background to create a West Coast distillery that truly embraces the “grain to glass” philosophy.

Spirit Works Vodka is crafted using organic, California-grown Hard Red Winter Wheat (originally created as the base for their gin, Timo and Ashby decided to bottle this vodka on its own after many requests during early distillery visits), which is distilled through Spirit Works’ custom-made, 800-liter pot still. This unique pot still was manufactured by the CARL company, Germany’s oldest still producer (the company, formed in 1869, is still family-run to this day), and is truly a “hybrid” device — the shape and components of the still make it well-suited to craft many different types of spirits, from vodkas and gins to whiskies and even brandies.

Spirit Works Vodka has an aroma of kettle corn, butterscotch and cinnamon, which leads to a sweet palate filled with earthy notes of seeds and wheat toast. The finish is dry and buttery.

Aroma of kettle corn, butterscotch and cinnamon, which leads to a sweet palate filled with earthy notes of seeds and wheat toast. The finish is dry and buttery.