$21.99
Caskers Rewards members earn up to 1 store points back when buying this bottle.

This product is available in: CO, CT, NY, OK, TX Unfortunately, we can't ship to PO Boxes and APO addresses.

Size750mL Proof70 (35% ABV)
This flavored vodka satisfies those berry cravings. It's a fruity 70-proof expression that is crafted with the award-winning SKYY Vodka and all-natural raspberry flavors.
Notify me when this product is back in stock.

This product is available in: CO, CT, NY, OK, TX Unfortunately, we can't ship to PO Boxes and APO addresses. 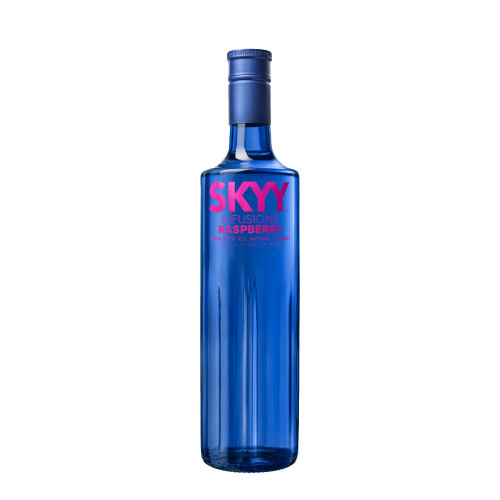 Founded in 1992 in San Francisco by the innovative and progressive mind of Maurice Kanbar, SKYY Vodka was born out of a quest to create the perfect classic martini. None of the vodkas that Kanbar tried met his high standards, which is why he decided to challenge the status quo. Kanbar invented a proprietary process that includes quadruple-distilling the vodka, triple-filtering through California Limestone, with SKYY Vodka providing an exceptionally smooth experience. Ever the pioneers, recently SKYY Vodka reimagined their gluten-free vodka. It's made with water that is sourced from the San Francisco Bay Area and rich in minerals, adding salinity and subtle minerality. SKYY Vodka is a smooth, fresher-tasting vodka that will elevate any cocktail with its character.

Always quadruple distilled and triple filtered, SKYY Vodka begins with a fresh and clean nose that’s faintly fruity. The exceptionally smooth palate is clean and offers subtle salinity and minerality. Bottled at 70 proof in a blue bottle, it’s the perfect vodka for a Vodka & Soda but it will elevate any cocktail. The vodka was awarded the Gold Medal at the 2021 edition of the San Francisco World Spirits Competition, among other awards.

The SKYY Infusions lineup is based on SKYY Vodka and consists of several expressions including Citrus, Blood Orange, Pineapple, Watermelon, Cherry, Peach, Strawberry, and Raspberry. They are crafted with real fruit flavors and natural aromas, extracts, essences, and juices. The raspberry flavor in this expression is all-natural and is infused into that solid vodka base before being bottled at 70 proof.

Berry notes abound in this flavored vodka. Fresh raspberries greet the nose, while the sweet palate has more raspberry, raspberry jam, bubblegum, and just a hint of black pepper that lingers through the finish with a touch of tartness.