Size750mL Proof90 (45% ABV)
The original Riga Black Balsam is a 90-proof traditional bittersweet black liqueur with the recipe dating back to 1752. 17 of the 24 ingredients are various botanicals that get infused using a unique single-barrel infusion, before being blended with other ingredients.
Notify me when this product is back in stock. 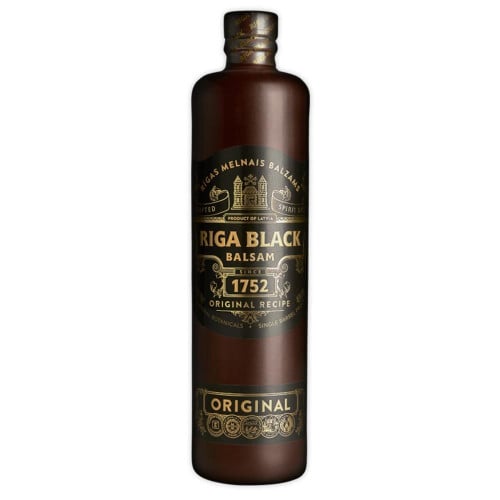 Riga Black Balsam is a traditional Latvian spirit. The Latvian balsam ― an infused liqueur ― is among the oldest herbal bitters in the world, having been created more than 260 years ago. It was in 1752 that Abraham Kunze, a pharmacist from Riga, Latvia, crafted the recipe, borrowing from balsam recipes of the past. Ever since, tradition has dictated that only the Head Liquor Master and his 2 apprentices know the exact ratios and details. While the recipe was lost during World War II, it was found and restored by former employees soon after and has remained unchanged since.

17 out of the full 24 ingredients are botanicals that include valerian, wormwood, black pepper, and ginger, as well as rarer ingredients such as gentian and Peruvian balsamic oil. These are infused in a mix of spirit and water using their unique single-barrel infusion process, before being blended with the rest of the ingredients that include honey, caramel, and natural juices. They call the signature clay bottle the "25th secret component", as the type of bottle has been used traditionally for the liqueur. The initial 6 months spent in the bottle let the flavors and aromas marry, contributing to the rich bittersweet profile of the finished product. The original Riga Black Balsam is bottled at 90 proof and has received over 100 medals and awards through its rich history.

Intensely rich, this liqueur has bitter-sweet and herbal notes, balanced with floral, fruity, and sweet ones. Blossoms, raspberry, oak, honey, and caramel are balanced with ginger and nutmeg. The finish is powerfully bitter, spicy, and warm.