Drambuie The Isle of Skye Liqueur

Size750mL Proof80 (40% ABV)
Drambuie is an 80-proof whisky liqueur that is crafted with Scotch malt whisky, spices, herbs, and heather honey. The story goes that the recipe dates back to the 18th century. It has been kept secret all these years and is kept in a safe.
Notify me when this product is back in stock. 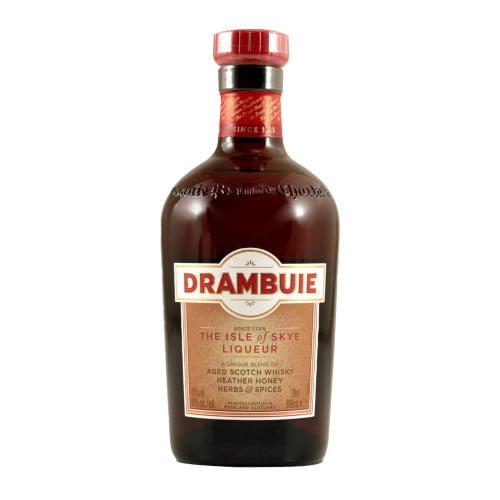 About Drambuie The Isle of Skye Liqueur

"Drambuie" supposedly comes from Scottish Gaelic and means "a satisfying drink". It's a whisky liqueur that is crafted with well-aged Scotch malt whisky, spices, herbs, and heather honey. The recipe was originally created for Charles Edward Stuart in the 18th century by the royal apothecary. He is said to have drunk a few drops each day as the potion would grant him strength and vitality.

When Charles returned to Great Britain from his exile, hoping to restore the House of Stuart to the throne, he was defeated and forced to flee to the Isle of Skye. Helped by the Clan MacKinnon, he was able to flee the British Isles and rewarded John MacKinnon the secret recipe to Drambuie. It wasn't until a century later that John Ross, a hotelier, got hold of the recipe and proceeded to make a batch. As the story goes, a couple of locals declared it "the drink that satisfies", which is where the liqueur gets its name.

Ross's son patented the name in 1893, the recipe eventually finding its way to Edinburgh, where the Drambuie Liquor Company Ltd. was opened in 1914. It was a century later that William Grant & Sons acquired the brand and the recipe, after it had been passed down through generations. Kept in a safe, only a handful of people know its contents.

Grab a bottle of this unique whisky liqueur today!

Drambuie has a rich, herbal, and floral nose. The palate is pleasantly sweet with honey, nutmeg, saffron, and anise notes that linger through the long and equally sweet finish.