Learn more
Size750mL Proof80 (40% ABV) *Please note that the ABV of this bottle may vary
Made from 100% baby blue agave, each of these tequilas scored over 90 points from the Beverage Testing Institute and Wine Enthusiast. 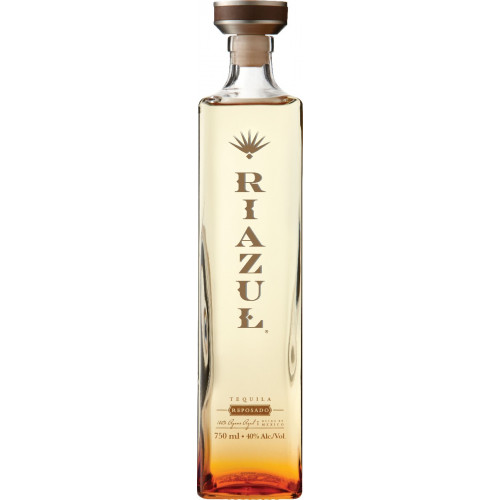 Two hundred years ago, the highlands of Jalisco, Mexico served as a key battlefront in the Mexican War of Independence. During the struggle, Maria Higinia Gomez served as a consigliere to the Mexican revolutionaries as they fought for their independence against Spanish colonialists. After their victory, the revolutionaries awarded her 10,000 acres of land for her service, most of which she then gave away to other rebels. The remaining 620 acres were handed down from generation to generation and virtually untouched until her great grandson, Iñaki Orozco, the founder of Riazul Tequila, inherited the land in the late 1990s.

Orozco recognized the the land's high elevation, cool climate and red volcanic soils — or tierra roja — would give rise to a blue agave that was more aromatic and sweeter than other agave being grown in Jalisco. In addition, Orozco learned that the baby blue agave plants he intended to use — known to have higher sugar contents than traditional blue agave plants — would release additional nectar when exposed to the plantation's cool climates, resulting in an even more flavorful tequila. After planting 100 initial blue agave shoots, which confirmed his hypothesis, Orozco worked tirelessly to plant another 175,000 shoots. Today, thousands of baby blue agave plants are being harvested on Orozco's plantation at their peak of maturity by expert jimadors. After harvesting the agave, the jimadors steam-bake their piñas, or hearts, in ovens for 36 hours before crushing the piñas and fermenting the extract. Following fermentation, Riazul Tequila is distilled twice in stainless steel pot stills.

Riazul Silver Tequila is brought to proof and bottled immediately after distillation. It has strong bursts of white and black pepper that are complemented by bold notes of sweet agave. Riazul Silver earned a score of 92 points from the Beverage Testing Institute and a score of 90-95 points from Wine Enthusiast.

Riazul Reposado Tequila is aged for nine months in a combination of French and American oak barrels before being brought to proof and bottled. It has subtle, complex notes of citrus and oak, with hints of honey, vanilla and caramel. Riazul Reposado Tequila earned a score of 93 points from the Beverage Testing Institute and a score of 90-95 points from Wine Enthusiast.

Riazul Añejo Tequila is aged for two years — longer than any other tequila in its class — in used French oak barrels made from the Citeaux forests of Burgundy, France. The tannins from the oak barrels, which feature a medium toast and were previously used for aging brandy, highlight the traditional blue agave taste, while capturing delicate notes of honey, vanilla and almonds. Riazul Añejo Tequila earned a score of 93 points from the Beverage Testing Institute and a score of 95-100 points from Wine Enthusiast.

The roots of Riazul Tequila sprouted from a struggle for freedom, and gave rise to the independent, rebellious spirit that defines Riazul Tequila today. Try all three bottles at an incredible price!

Silver: Bursts of white and black pepper that are complemented by bold notes of sweet agave.