Size750mL Proof80 (40% ABV)
Coming from Chicago, Illinois, this is a premium pear brandy, made from locally sourced Bartlett pears from the Great Lakes Region. Around 25 lbs of pears are needed to produce 1 bottle.
Notify me when this product is back in stock. 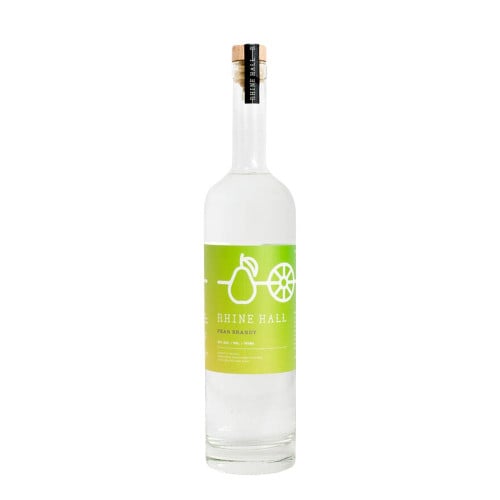 Founded in 2013 on Fulton Street in Chicago's industrial neighborhood, Rhine Hall distillery is owned and operated by a father-daughter duo Charlie and Jenny Solberg. Named after Rheinhalle – an ice rink in Austria where Charlie used to play professional hockey – it was during his time that Charlie had his first distilling experience in the fruit-growing region of Austria. After moving to Germany with his family, his passion kept growing as he learnt how to make
the traditional eau de vie from locals. Eventually, the family moved back to their hometown of Chicago, continuing with distilling in their backyard. Finally, in 2012, Charlie and his daughter Jenny decided to take things to the next level and started a successful brandy business.

Rhine Hall produces fruit brandies, known in Europe as eau de vie or schnapps. Their core line up has expanded to include nineteen new and aged brandies, grappas, and liqueurs.The process begins with fresh fruit – cherries, apricots, plums, or pears – all sourced locally from the Great Lakes Region. The fruit is then chopped, fermented, distilled and finally bottled. No artificial flavors, sweeteners, or other neutral spirits are added to Rhine hall brandies and there's about 25lbs of fruit in each bottle.

Rhine Hall Pear Brandy is a single varietal brandy, made from the Bartlett pear – similar to the Williams pear that grows in Germany and Austria. Up to 40,000 lbs of pears per year are sourced from small farms in Michigan, hand sorted and mashed at the distillery. The pears are fermented for 3 weeks in stainless steel tanks and then distilled in column stills, imported from Germany. Finally, this premium pear brandy rests for at least 9 weeks in stainless steel before it's filtered and bottled. Bottled at 80 proof, the flavors of fresh pears, slate, pear blossoms, and white flowers develop harmoniously on the well-balanced palate.

Get your pear brandy from Chicago today!

The nose immediately delivers aromas of fresh pear, lemon zest, and honeydew melon. The palate is ripe pears, slate, pear blossoms, and white flowers. The finish is refreshing and sophisticated.