Learn more
Size750mL Proof92 (46% ABV) *Please note that the ABV of this bottle may vary
This special single malt is the masterful creation of Indian spirits producer John Distilleries Ltd., the brainchild of Mr. Paul P. John, who had the vision of creating ‘The Great Indian Single Malt.’ 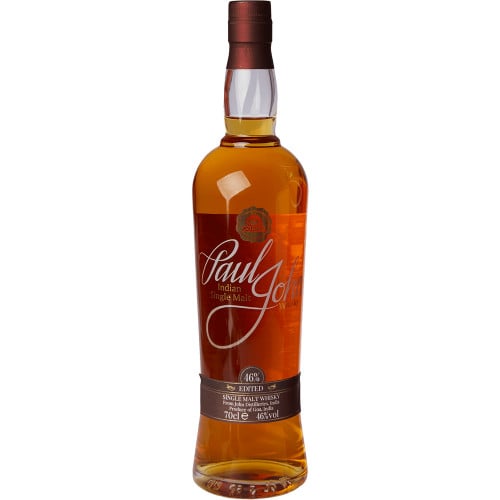 Paul John single malt whiskies are the masterful creations of John Distilleries Ltd. JDL was established in 1992, by Mr. Paul P. John, who had a vision for creating a quality, premium, international single malt. Most Indian whisky is not distilled from the usual grains that Scotch whisky drinkers are accustomed, rum drinkers are more than likely to be more accustomed, as it is distilled from a molasses base.

But Mr. Paul P. John had the vision of bringing a single malt to the market that would captivate even the most cutthroat whisky connoisseurs. Under the guidance of Master Distiller Michael D’Souza, John embarked on a journey to create, 'The Great Indian Single Malt.'

Paul John’s single malt whisky hails from the southwestern Indian state of Goa. As one of the 3 biggest Whisky producers in India, JDL launched their single malt in 2008 and made their full line of whiskies available to US markets in 2016.

Their Indian barley, sourced from the foothills of the Himalayan mountains, yields less alcohol than its European counterpart, but is said to have a much higher flavor profile. The whisky is matured in a tropical climate, which results in over 20% of the whisky being evaporated each year. This climate is what makes Indian whisky mature faster than their Scotch counterparts

The single malt mixture contains 15% spirit peated at 20-25ppm, giving the final product a sweet and spicy character, with a balanced smokiness. The single malt then gets its rest in bourbon casks. This expression won Gold for the single malt category at the Wizards of Whisky Awards.

Get your bottle of this special Indian whisky today!

Beautiful nose filled with aromas of port, candied cherries, vanilla and strawberry jam. The palate is equally as enthralling, with notes of cinnamon and nutmeg mingling with orange peel and anise before leading to a long, dry and oaky finish.