Learn more
Size750mL Proof86 (43% ABV) *Please note that the ABV of this bottle may vary
Aged for over three decades, this Grande Champagne cognac is one of the most highly decorated spirits ever.
Notify me when this product is back in stock. 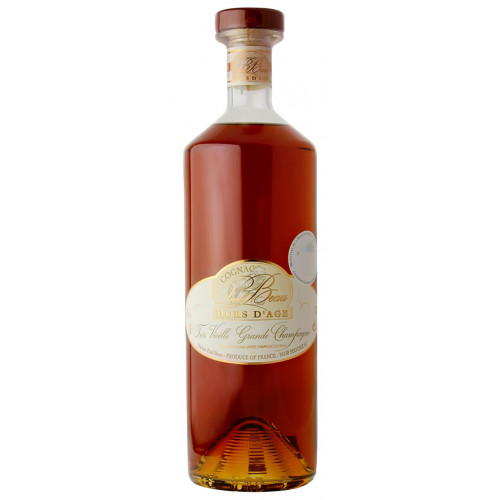 At the end of the 19th century, Samuel Beau purchased a dilapidated vineyard in the Grande Champagne region of Cognac, France. While the vineyard had suffered from a neglectful owner, Beau recognized that the estate enjoyed rich, chalky soils, rolling hills and generous amounts of sunlight, and would be ideal for the distillation and maturation of cognac. After purchasing the estate, Beau began tending to its soil and improving the quality of the grapes that were cultivated on the estate. Upon his death in 1914, Beau passed the vineyard on to his son, Paul. Under Paul's stewardship, the estate was expanded to just over 100 hectares and many of its buildings were modernized, including the distillery. While much of the cognac produced by Maison Beau was sold to larger cognac houses during the 20th century, the Paul Beau label was created specifically for the purpose of bottling the best cognacs distilled and bottled by the Beau family.

Paul Beau Hors D'Age Cognac is made exclusively from Ugni Blanc grapes (the grapes are highly acidic and lacking in tannins, making them ideal for the production of cognac). After the Ugni Blanc grapes have been harvested and pressed into a grape must, the must is fermented into a wine and then twice-distilled through a 25-hectolitre, antique copper still. Following distillation, the cognac is matured in Maison Beau's cellars for over 30 years. As a result of its three-decade long beautyrest, Paul Beau Hors D'Age Cognac (hors d'age means "beyond age"in French) has rich, lush notes of dried fruits and vanilla, which are complemented by deep notes of raisins, maple syrup, oak and pepper, and lead to a long, gratifying finish.

Paul Beau Hors D'Age Cognac is one of the most highly-decorated cognacs ever produced, having earned six Gold Medals at the Concours Général de Paris since 2000 and numerous additional medals at the International Wine and Spirits Competition in 2010 and 2011. In addition, Maison Paul Beau received the Excellence Prize at the Paris Agriculture Show in 2010 and the Concours Generale Agricole in 2012 for outstanding quality and consistency in production. Finally, the cognac was awarded five stars by F. Paul Pacult's Spirit Journal and was named one of the 130 Best Spirits in 2010.

Pick up an incredible cognac today!

Full notes of dried fruits and vanilla, which harmonize with notes of raisins, pepper, oak and maple syrup. Long and gratifying finish, with hints of cinnamon and cedar.