Learn more
Size750mL Proof80 (40% ABV) *Please note that the ABV of this bottle may vary
Made in homage to the company's founder, this cognac is a blend of cognacs matured in France and England. 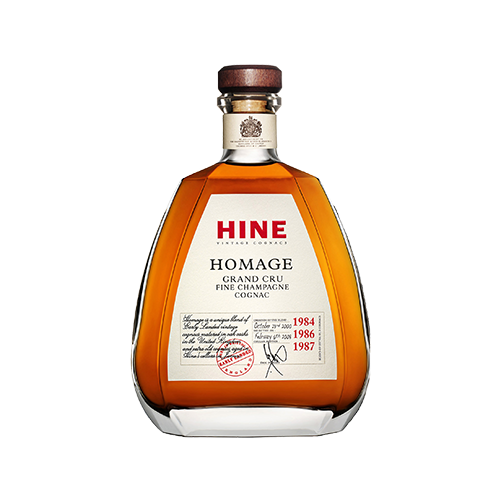 "We are one of the smaller houses in Cognac and produce a small percentage of what the major houses do," says Francois Le Grelle, the Managing Director at the House of Hine. "For us it's not about growth, it's about maintaining the highest level of quality."Founded in 1817, the House of Hine has been in the same family for six generations. In 1791, Thomas Hine — the company's founder — left his native England in order to learn the art of making cognac. Today, nearly 225 years later, his great-great-great-great grandson, Bernard Hine, oversees the 297-acre Hine Estate.

Situated on the banks of the River Charente, the Hine Estate benefits from a south-facing aspect, which maximizes the grapes exposure to sunshine and heat. In addition, the estate is situated entirely in the Grande and Petite Champagne crus of France, where the soils are very chalky, explains Eric Forget, Hine's Cellar Master. "Hine's finesse comes from the terroir,"he says.

Crafted in honor of Hine's founder, Hine Homage Fine Champagne Cognac is a blend of three vintage Early Landed Grande Champagne cognacs, together with a Hine Cognac matured in Jarnac, France. (Centuries ago, English shipping merchants purchased barrels of freshly distilled cognac from France and transported them to England, where the cognac was allowed to mature. These cognacs were said to have "landed early.")

The Early Landed Cognacs, which were produced in 1984, 1986 and 1987, were matured in oak casks in the chalk cellars of Bristol, which is situated in southwest England. The cellars steady temperatures (generally between 46° and 53°) and high humidity (rarely below 95%) were responsible for creating a delicate, refined cognac with a fruity nose and a light, floral flavor profile. The Hine Cognac aged in Jarnac, however, was exposed to dry conditions and fluctuating temperatures (as low as 43° in the winter and as high as 72° in the summer) due to the city's inland location in southwest France. As a result, the Hine Cognac aged in Jarnac has rich, complex notes of oak and robust woody spices.

Much like Thomas Hine himself, Hine Homage is a blend of French tradition and English innovation. Hine Homage has an intensely floral aroma, with notes of citrus and orange peel that open up to hints of mushrooms and oak. The finish is crisp and clean, but ends with a touch of spice.

Pay homage to this fine cognac and pick up a bottle today!

Intensely floral aroma, with notes of citrus and orange peel that open up to hints of mushrooms and oak. Finish is crisp and clean, but ends with a touch of spice.