Size750mL Proof80 (40% ABV)
Ocho Plata Tequila is the unaged expression and the purest tribute to the agaves of the Arandas region and the Camarena agave fields. Each bottle is marked with the year of production, as well as the specific "rancho" from which the agaves originate.
Notify me when this product is back in stock. 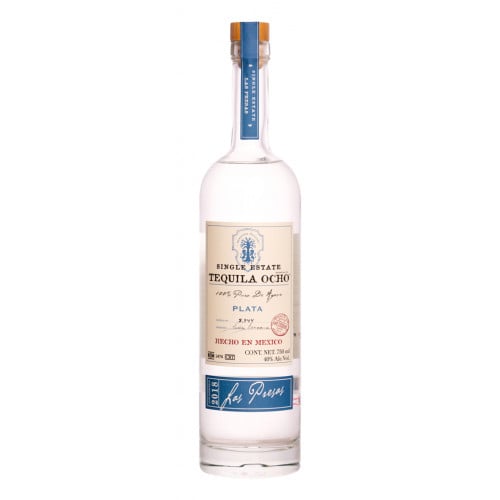 "Ocho" translates to "eight" and the number is deeply ingrained in the distillery's history and operations. Out of the first samples produced by the Camarenas, the 8th was chosen. It's the number of years agaves need to fully ripen, as well as the number of kilograms of agave needed to produce a liter of Ocho tequila. It's also the exact number of days that takes for a freshly delivered batch of fruit to be turned into unaged tequila. Carlos Camarena has 8 siblings and the family has been distilling for 8 decades.

Every bottle of Ocho Tequila is marked with the year of production, as well as the estate or "rancho", from which the agaves come, not unlike fine wines. This makes the bottles highly collectible. Ocho Plata Tequila is the unaged expression, made from 100% blue agave, then bottled at 80 proof. It is the purest tribute to the agaves of the Arandas region and the Camarena agave fields.

There are cooked agaves on the nose, along with peppery, earthy, and citrusy notes. All that is joined by mint and tropical fruit on the palate, culminating in a smooth and long finish.