Size750mL Proof114.3 (57.15% ABV)
Aged for up to 20 years, this small batch Kentucky bourbon earned the Double Gold Medal at the San Francisco World Spirits Competition in 2012. 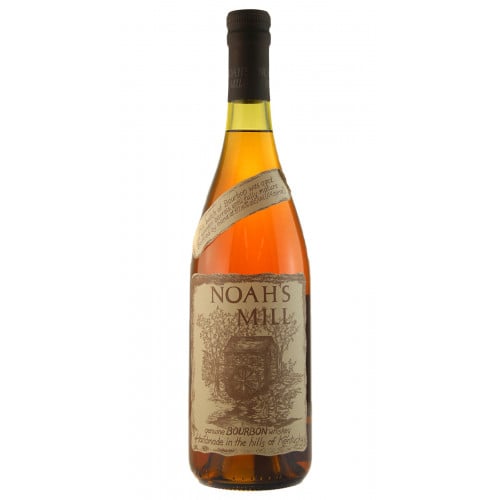 Following the defeat of the British at the Battle of Yorktown during the American Revolutionary War in 1781, the territory west of the Appalachian mountains became known as Kentucky County. At the time, the territory was considered part of Virginia, and was overseen by a military governor named John J. Bowman. In order to encourage westward expansion, Virginia issued pioneers who agreed to settle in Kentucky County "corn writs," which granted the pioneers 60 acres of land if they agreed to settle in Kentucky and start farming corn. Within a decade, some 2,000 farmers had settled and begun growing corn in Kentucky County. In order to prevent spoilage of the excess grains they harvested — there was a massive increase in the supply of corn as a result of the corn writs, with no corresponding increase in demand — these farmers began milling and mashing their excess corn, and distilling it into bourbon.

Noah's Mill Small Batch Kentucky Bourbon Whiskey pays homage to these early pioneers and their entrepreneurial spirit. The bourbon is crafting by marrying together no more than twenty casks of Kentucky bourbon, each of which has its own unique characteristics and flavor profile. In contrast to most small batch bourbons, the casks used to craft Noah's Mill have varying mashbills — while some casks are composed of bourbons that use rye as a secondary grain, others are composed of bourbons that use wheat as a secondary grain. The varying recipes — the percentage of rye and wheat used also varies among the casks — results in a layered bourbon that has a virtually unparalleled depth and complexity.

After the casks of bourbon have been allowed to mature for up to 20 years, small batches of the bourbon are bottled at 114.30 proof. Noah's Mill Small Batch Kentucky Bourbon Whiskey has an aroma of dark coffee, vanilla, raisins and toffee. The initial hints of figs, dates, and dark fruits give way to notes of cocoa, marmalade, berries, roasted nuts and toffee, and lead to a lengthy, spicy finish.

Noah's Mill Bourbon earned the Double Gold Medal at the San Francisco World Spirits Competition in 2012, and was "highly recommended" by F. Paul Pacult's Spirit Journal. In addition, it earned a score of 93 points from Jim Murray's Whisky Bible in 2012.

Aroma of dark coffee, vanilla, raisins and toffee. Initial hints of figs, dates, and dark fruits give way to notes of cocoa, marmalade, berries, roasted nuts and toffee. Lengthy, warm finish that has a touch of spice.