Size750mL Proof90 (45% ABV)
Distilled in pot stills that are heated with steam at the Miyagikyo Distillery in Japan, this whisky is aged in ex-sherry casks. 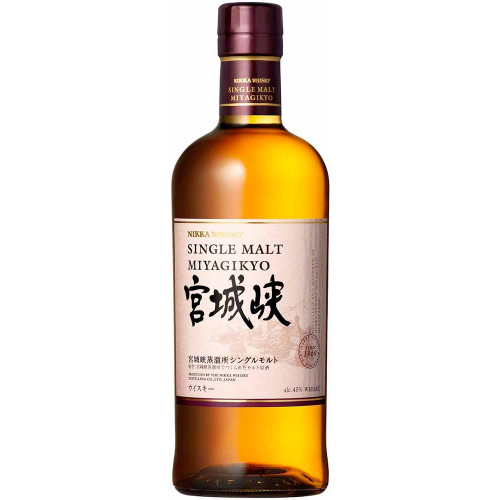 In 1895, Masataka Taketsuru — “the father of Japanese Whisky” — was born in the small town of Takehara, Japan. At the time, Masataka's family owned a sake brewery, and in preparing to carry on the family trade, Masataka studied chemistry and biology at Osaka Technical High School. After graduating high school, Masataka showed more interest in whisky than in sake and in 1918, he enrolled at the University of Glasgow in Scotland, becoming the first Japanese ever to study the art of whisky-making. While in Scotland, Masataka took chemistry courses during the day while apprenticing with distilleries at night, learning to distill and blend whisky first-hand at some of Scotland's most prestigious distilleries. In 1920, Masataka returned to Japan, and within the decade, had produced the country's first single malt whisky.

Nikka Miyagikyo Japanese Single Malt Whisky is distilled and aged at the Miyagikyo Distillery, which is known for its lighter, more floral malts (as opposed to the heavier, more oily malts produced at Yoichi). Made from 100% malted barley and distilled in pot stills that are heated with steam as opposed to coal fire, Nikka Miyagikyo Japanese Single Malt Whisky is then aged in ex-sherry casks. As a result, the whisky has a delicate and modern aroma of bitter green apple, citrus zest, nougat and ginger, which leads to a palate filled with vanilla custard, nutmeg and cinnamon, along with a subtle smokiness. The finish is light and smoky, with notes of dried mango, breakfast cereal and honey.

Nikka Miyagikyo Japanese Single Malt Whisky is one of the rarer Japanese whiskies available in the entire United States — pick up a bottle today!

Delicate and modern aroma of bitter green apple, citrus zest, nougat and ginger, which leads to a palate filled with vanilla custard, nutmeg and cinnamon, along with a subtle smokiness. Finish is light and smoky, with notes of dried mango, breakfast cereal and honey.