New Amsterdam Spirits from Modesto, California released New Amsterdam Vodka in 2011 after the success of their New Amsterdam Gin. It is now one of the fastest-growing vodka brands in the world. The brand is owned by E. & J. Gallo Winery and has accumulated numerous awards since its inception, finding a comfortable place with the young and trendy crowd. It's distilled 5 times and triple-filtered, smooth enough to be drunk straight, as well as a perfect base for cocktails. Named for the Dutch colony that was later renamed into New York City, the bottle features a skyline of the Big Apple.

For their pink lemonade flavored vodka they teamed up with Barstool Sports' #1 NHL podcast, Spittin' Chiclets. The drink is named after Ryan Whitney, former professional hockey defenseman and current Spittin' Chiclets podcast co-host. The idea for the drink came about when the team was talking about their favorite vodka drinks and Ryan mentioned that his favorite way to drink New Amsterdam Vodka was with pink lemonade. The resulting drink is based on that: The vodka is infused with pink lemonade flavor, making for a fun sweet, zesty, and refreshing drink that perfectly balances its sweet and sour tastes.

The pink lemonade-infused vodka is crisp and makes for a fun sweet, zesty, and refreshing drink that perfectly balances the sweet and sour tastes. 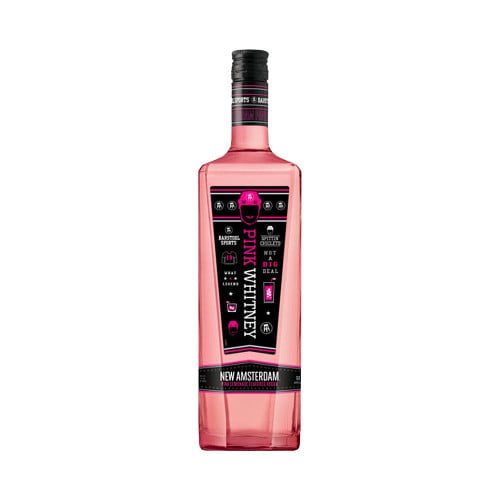