Learn more
Size750mL Proof80 (40% ABV) *Please note that the ABV of this bottle may vary
Did someone say honey and pepper vodka? All you need to know about this Ukrainian firecracker is that you need to try it.
Notify me when this product is back in stock. 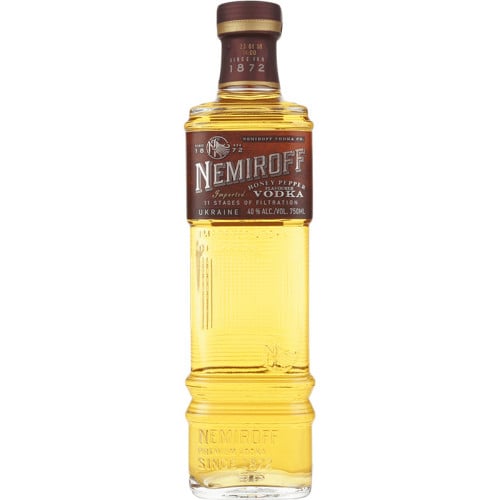 You might be bewitched or even stupefied by the idea of honey and/or pepper vodka. In Ukraine, the concept has been known for over a century, and in 1997, the Nemiroff Ukrainian Vodka Company decided to combine the two flavors. The recipe finds inspiration in Slavic traditions and the concoction is surprisingly spectacular. The premium and out-of-the-box spirit offers flavors of wild herbs, honey, and red chili peppers. Nemiroff Honey Pepper Vodka is bottled at 40% ABV, and the first thing you'll notice is the beautiful amber hue. Look closer, and you'll see small chili peppers inside, like red maguey worms in mezcal. If you enjoy it neat, you'll experience wonderful heat rising with each sip, pampering your palate with a creamy texture and hot spicy flavors. Now imagine putting this wild thing into Bloody Caesar!

Nemiroff Ukrainian Vodka Company is the No.1 exporter of vodka in Ukraine and one of the world's largest producers of alcohol, sold in more than eighty countries. The company's name has roots in "Nemyriv vodka," first mentioned in the mid-1700s. In 1872, Count Stroganov opened a distillery in Nemyriv, which the Soviets nationalized in 1920, and after the Union fell, vodka production resumed, and the Nemiroff trademark was registered. By 2006, Nemiroff became the No.2 vodka brand in the world.

The vodka offers an aroma of fresh black pepper, which translates beautifully into the palate. The creamy texture and hot spicy flavors coat the mouth without burning. Expect a lot of pleasant and inviting heat.