Size750mL Proof84.6 (42.3% ABV)
Only the finest, oldest, and rarest eaux-de-vie from the Naud family cellars make it into the Extra. It's a rich, harmonious, and award-winning cognac expression that is bottled at a higher 84.6 proof.
Notify me when this product is back in stock. 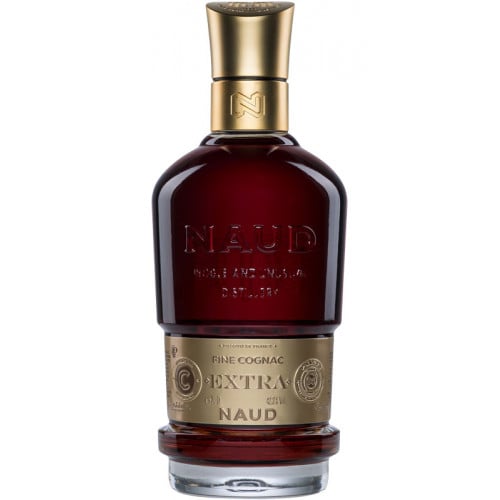 Naud Cognac Extra is crafted under the watchful eye of Jean-Michel Naud and his son Pierre using only the finest, rarest eaux-de-vie from their cellars, each batch meticulously tested before release. It's a culmination of all the tradition and expertise that the cognac house is built upon. The harmonious spirit features a magnificent mahogany color with golden highlights and notes of candied orange, cedarwood, rancio, vanilla, and tannins. The cognac is bottled at a higher 84.6 proof.

Get your bottle of this fantastic mature cognac today!

The color is a beautiful mahogany with golden highlights. On the nose, you'll find a harmony of candied orange, quince, coffee, cedarwood, and distinct rancio. The bold palate has orange peel, leather, roasted nuts, and tobacco, finishing with lingering vanilla, oak, and rancio notes.