Size750mL Proof80 (40% ABV)
This vodka is steeped in fresh ginger for nearly two months.
Notify me when this product is back in stock. 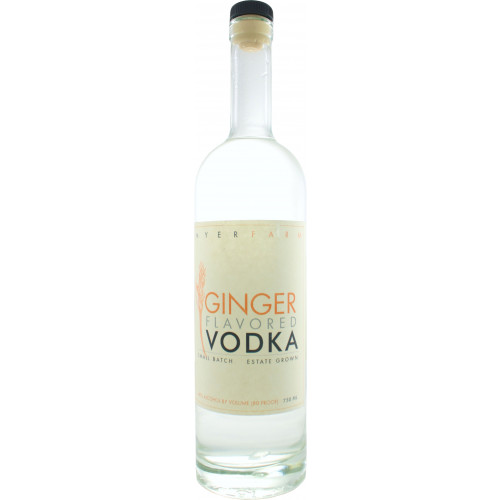 John Myer is the current steward of the Myer Family Farm and has been successfully nurturing and managing the land for over 35 years. Last year, Myer grew 240 acres of corn, 290 acres of soybeans and almost 100 acres of various wheat varieties, including triticale, spelt, barley and oats.

Inspired by the traditional distilleries of Scotland, Myer teamed up with his brother, Joe, and began constructing a distillery on Military Lot No. 5 in 2011. The distillery was outfitted with a hip-roofed and pagoda-topped still-house and was finished in hand-cut chiseled wall stone, in homage to Scottish malthouses. The Myers also equipped their distillery with a 650-liter, Christian Carl copper-pot still that is accented with a 19-plate rectification column, giving the brothers unparalleled control over the distillation process.

Myer Farm Ginger Vodka is made using soft white winter wheat grown on the Myer Family Farm. After the wheat is harvested, the Myers mash and ferment the grains before distilling the vodka three times through their custom-designed still. After distillation, the vodka is steeped for nearly two months in fresh ginger sourced from The Good Life Farm, which is situated just five miles away from the Myer Family Farm. The fresh ginger rounds out the flavors of vanilla and light pepper in the vodka, and provides for a subtle touch of sweetness on the finish.

Fresh and smooth, with notes of vanilla and pepper initially. Clean finish, with subtle touches of fresh ginger which add a hint of sweetness.