Size750mL Proof80 (40% ABV)
Fuzzy Celebrates the 100th year of INDYCAR, toasting to this illustrious premier open wheel racing tradition with their ultra premium, limited edition vodka tribute.
Notify me when this product is back in stock. 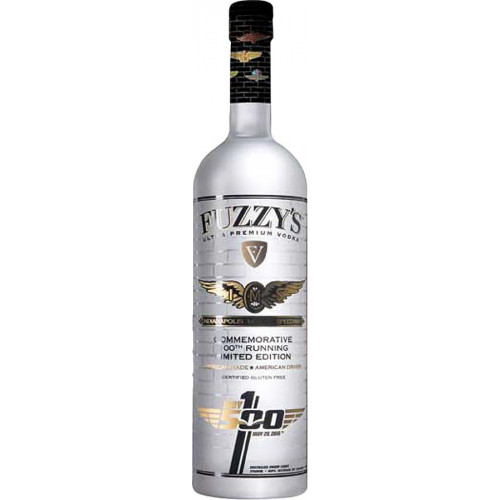 Frank Urban Zoeller, known affectionately as “Fuzzy,” is world renowned for his successful golfing career, his charismatic personality, and his award winning vodka. In homage to his cocktail of choice the “vodka tonic,” he launched Fuzzy Vodka in 2009. The Indiana- based spirits brand is produced by Fuzzy Spirits LLC in Indianapolis. The critically acclaimed ultra premium vodka is the official vodka of INDYCAR.

“The vodka is distilled five times from American corn and then filtering ten times through charcoal and lava. After distilling, a portion of the distillate is rested in new oak barrels, an extremely rare process in the production of vodka.  The addition of Cascade Mountain spring water, known as some of the purest water in the world, completes the process.”

This process yields quality, a smoother, creamier resultant spirit that has won countless awards, including a Gold medal at the 2016 San Francisco World Spirits Competition. The Ultimate Spirits Challenge gave Fuzzy's a 93 calling it “Clean…The bright, pure nose, underpinned with just a muted alcohol, is a prelude to a round creaminess on the palate, which unravels with subtle notes of fresh green fern and pine. Finish is crisp and bright.”

Fuzzy has launched two commemorative bottles in honor of the 100th year of the illustrious premier open wheel racing tradition, and it's longstanding relationship with the legendary series. The first release is a 750ml bottle adorned with the names of the past 500 Indianapolis winners. It is bottled at 40% ABV.

"The bright, pure nose, underpinned with just a muted alcohol, is a prelude to a round creaminess on the palate, which unravels with subtle notes of fresh green fern and pine. Finish is crisp and bright" (Ultimate Spirits Challenge)