Be the first to review this product
Distilled three times and aged in French oak barrels, these tequilas have each earned multiple awards.
$49.99
Add to Wish List

As a result of the tequila shortage, the price of agave soared from seven cents per kilo, to over $1.40 per kilo. "That almost put us out of business," says Schneeweiss, reflecting on the launch of his company over 15 years ago. "We were fortunate to find Juan de La Torre,"he continues, whose estate in the Highlands region of Mexico was so isolated that it remained unaffected by the bacteria. He had "enough agave for us to produce tequila for three years," says Schneeweiss. "With that agave, he bought equity in the company, and we are still partners today. All the agave that we use is estate-grown by Juan."

Milagro Select Barrel Reserve Silver Tequila is mellowed for just over one month in French white oak barrels. The barrels impart faint hints of cinnamon and spice to the tequila, and complement its notes of herbs and fresh citrus. Milagro Select Silver earned a score of 94 points from the Ultimate Spirits Challenge in 2012, and was rated the best blanco tequila in the entire competition. In addition, it earned the Double Gold Medal at the San Francisco World Spirits Competition in 2013.

Milagro Select Barrel Reserve Reposado Tequila is matured for ten months in French white oak barrels. It has a honey, amber color, along with an aroma of vanilla and oak. The notes of fresh pepper and creamy vanilla open up to hints of cinnamon, bold citrus and baking spices, and lead to a dry finish. Milagro Select Reposado earned a score of 91 points from the Ultimate Spirits Challenge in 2012 and earned the Double Gold Medal at the San Francisco World Spirits Competition in 2009. In addition, it received a score of 96-100 points from Wine Enthusiast.

Milagro Select Barrel Reserve Añejo Tequila is aged for three years in French white oak barrels, technically making it an extra-añejo tequila. It has a golden, amber color, along with an aroma of caramel and chocolate. The notes of caramel, tobacco and butterscotch open up to hints of sweet agave, pineapple and citrus, before leading to a dry finish. Milagro Select Barrel Reserve Añejo Tequila also earned a score of 91 points from the Ultimate Spirits Challenge in 2012 and the title "Best in Class"at the International Wine & Spirits Competition 2011.

Once each tequila has been distilled and matured for the requisite period of time, the tequila is bottled in a hand-blown glass decanter (the exquisite decanter has the negative-space of an agave plant growing inside the bottle).

"We started Milagro with no employees," says Schneeweiss, "only Moy and me. Our focus was never on the money; it was about the quality of the product. Our vision has always been about the agave, and Milagro is agave in its maximum expression."

Silver: Faint hints of cinnamon and spice complemented by notes of herbs and fresh citrus. 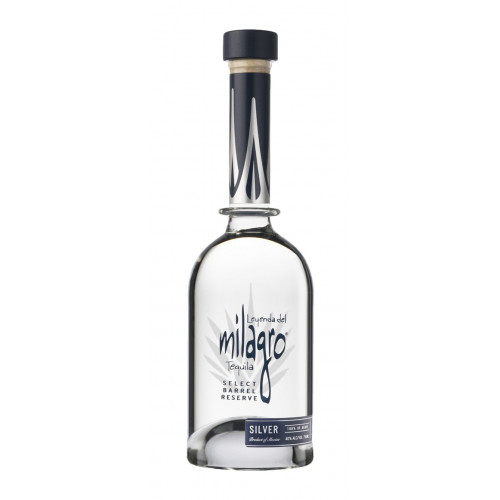