Learn more
Size750mL Proof86 (43% ABV) *Please note that the ABV of this bottle may vary
Named after a gentle female cat, this blended Japanese whisky was finished in Oloroso sherry casks for a rich nose with brown sugar and maple syrup, as well as a soft sweetness on the palate and finish.
Notify me when this product is back in stock. 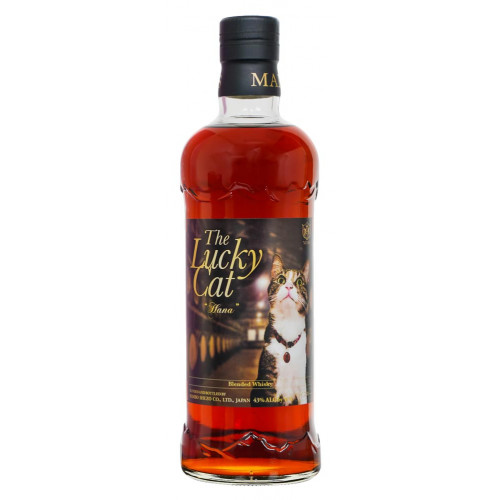 Mars Shinshu is Japan's highest whisky distillery, at 798 meters ― just over 2,600 feet ― nestled between Japan’s Southern and Central Alps. Mars Shinshu is owned by the Hombo family, who have been in the business of distillation for over a century.

Whisky became a part of the Mars Shinshu production lineup in 1949. In 1984, Shinshu decided to move their southernmost Kyushu distillery to the picturesque alpine Miyada village, where the high altitude and cool climate make for suitable conditions for whisky-making. The whisky is produced from mineral-rich waters that pass through granite rock.

Mars Shinshu’s whiskies continue to be some of the most inexpensive Japanese whiskies on the market, and they are full of high-quality character and complex flavor. The Lucky Cat "Hana" is a blended whisky that is finished in Oloroso sherry casks and has pleasant aromas of brown sugar and maple syrup, while the palate has a soft sweetness that persists through the finish. It's named after one of 2 cat sisters, Hana and Chocolate, this one being the gentler of the two.

The nose opens with brown sugar, maple syrup, and dark fruit notes. There's a soft sweetness on the palate with more dark fruit, vanilla, and orange zest. The gentle sweetness persists through the elegant finish.