Size750mL Proof84 (42% ABV)
Aged for over 33 years, this calvados was named one of the top ten spirits of 2014 by F. Paul Pacult’s Spirit Journal.
Notify me when this product is back in stock. 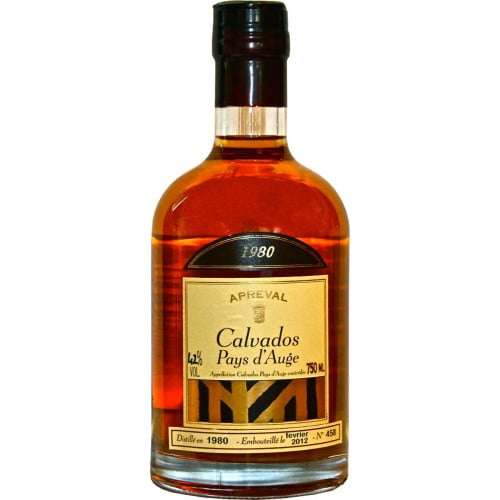 Manoir d’Apreval is a family-owned calvados distillery situated in the French commune of Honfleur, which sits in Normandy’s “Pays d’Auge” region, made famous for its production of apples and Camembert cheese. Established at the beginning of the 20th century by Victor Revillon, Manoir d’Apreval has since been stewarded by three generations of Revillon women — Victor’s wife, his granddaughter, and now his great granddaughter, Agathe Lettelier.

Manoir D’Apreval 1980 Calvados Pays D’Auge was crafted in 1980 from a unique blend of organically grown apples. Lettelier chose a selection of bitter and bitter-sweet apple varieties, which were rich in tannins and acidity and ultimately provided the calvados with its smooth flavor and full body. Once the apples were harvested and pressed into a tart juice, the fresh cider was rested for ten months in a fermentation tank in order completely transform the sugars into alochol. Next, the cider was twice distilled through a pot still in the traditional Pays d’Auge method and then immediately transferred into oak barrels for maturation.

Manoir D’Apreval 1980 Calvados Pays D’Auge was matured in 1,200 liter oak barrels for 25 years, before being transferred into 400 liter barrels in 2005. After maturing for over 33 years, the calvados was brought to proof and bottled. It has a dark mahogany color, along with an aroma of bitter oranges, cocoa and ginger bread. Notes of dark chocolate, orange, citrus and caramel dominate the palate, and lead to a finish accented by tobacco leaves and coffee beans.

Manoir D’Apreval 1980 Calvados Pays D’Auge was named one of the top ten spirits of 2014 by F. Paul Pacult’s Spirit Journal. Pick up a bottle today!