Size750mL Proof80 (40% ABV)
This incredibly rare shochu is inspired by Gabriel Garcia Marquez’s One hundred Years of Solitude.
Notify me when this product is back in stock. 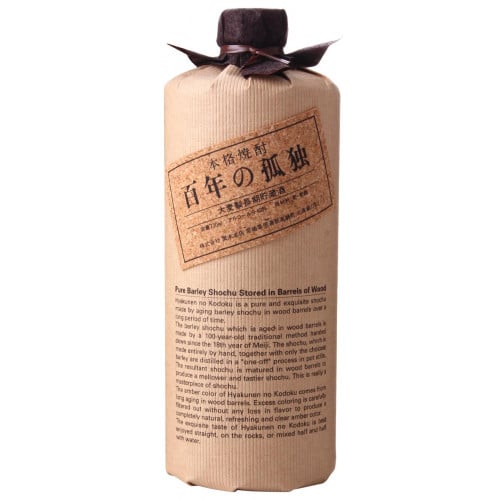 Kuroki Honten has been producing shochu exclusively since 1885. Establishing themselves as industry trailblazers, Honten has introduced several critically acclaimed shochu, such as Kodoku no Hyakunen, “100 Years of Solitude.” Named after the famed novel, this expression is one of the most renowned aged barley shochu in Japan.

Produced in the Miyazaki prefecture, their company ethos,“shochu-making is agriculture” reflects the pride they take in growing the ingredients for the shochu, which they grow themselves on their own organic farm. Kuroki Honten is also green in terms of production, using the byproducts of shochu production in fertilizer to continue the cycle.

Hyakunen No Kodoku is a premium quality shochu, crafted by aging barley shochu in wood barrels for an extended period of time. Hyakunen No Kodu shochu is created using a century old traditional method handed down since the 18th year of Meiji. Distilled once in pot stills and matured in wood barrels produces a much mellower and smoother rare shochu.

It is crafted from a mash of 100% locally grown barley, sourced from the distillery’s own organic farm, as well as white koji, an ingredient that keeps the flavor smooth and distilled at normal pressure to preserve oils. It is then aged undiluted in oak casks for three to five years which helps it to develop its overall structure and fullness. The final result is a highly nuanced, exquisite spirit, with whisky-like elements, with its prominent toasted barley notes, cereal grains, and higher ABV closer to whiskey than most other milder shochu spirits.

This is an incredibly special release, its distinctiveness parallels some of the finest whiskies.

“An amber color and a sweet taste with a strong flavor of barley. It is best to drink on the rocks. This shochu was named after the novel of Gabriel Garcia Marquez, One hundred Years of Solitude. This is a very rare shochu and is often sold out easily due to its popularity and small production units” (Kuroki Honten).

Amber in color. The palate is smooth, full of sweet flavors and a strong element of barley.