Size750mL Proof80 (40% ABV)
Aged for up to 70 years, this cognac earned the Platinum Medal at the World Spirits Championship.
Notify me when this product is back in stock. 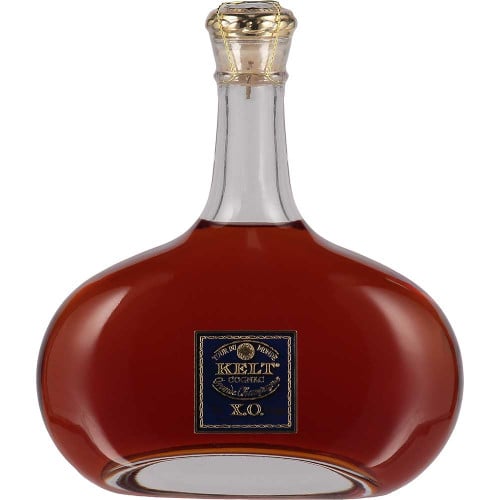 Situated along the banks of the Charente River, the Cognac region of France is divided into six different crus (cru is a French term for growth zones): Grande Champagne, Petite Champagne, Borderies, Fins Bois, Bon Bois and Bois Ordinaire. The Grande Champagne cru, which comprises approximately 34,000 hectares, is known for its quiet hills and rich, chalky soil, and grows arguably the finest grapes for cognac production in the region.

Kelt XO Tour Du Monde Cognac is made exclusively from Ugni Blanc grapes harvested in the Grande Champagne region. After the grapes have been harvested, they are pressed and the remaining grape juice is fermented into a wine. Then, the grape wine is distilled twice through a traditional alembic still, and the resulting cognac is matured in French Limousin oak casks for an average of 30 years (although a portion of the cognac is matured for up to 70 years).

Following its initial, three-decade long beautyrest, the casks of cognac are loaded onto the top deck of an Evergreen Lines ship that circumnavigates the globe over the course of three months (a "Tour du Monde"). As a result of this ocean-aging, the cognac and oak are forced to mingle as the ship rolls back and forth through the water. In addition, the temperature and barometric pressure fluctuations during the sea voyage cause the oak staves to expand and contract, and allow the cognac to extract more of the tannins and flavor from the oak during its maturation. After its journey at sea, the cognac is returned to France and rests in Kelt's stone cellars for an additional 65 days before it is finally bottled.

Kelt Tour Du Monde XO Cognac has a deep amber color, along with an aroma of flowers, jasmine and honeysuckle. The aroma opens up to subtle notes of wood on the palate, including oak and cedar, which complement notes of port, walnuts, apricots, pears and apples. The finish, which is smooth and elegant, has a touch of sweetness.

Kelt XO earned a score of 93 points from Wine Enthusiast, which rated it the best XO Cognac. In addition, it is the only XO Cognac to ever be awarded the Platinum Medal at the World Spirits Championship.

Pick up a bottle of the best today!

Deep amber color, along with an aroma of flowers, jasmine and honeysuckle. Subtle notes of wood on the palate, including oak and cedar, which complement notes of port, walnuts, apricots, pears and apples. Finish, which is smooth and elegant, has a touch of sweetness..