Learn more
Size750mL Proof90.4 (45.2% ABV) *Please note that the ABV of this bottle may vary
Distilled from New York state wheat and honey, a portion of the sales from this gin will be donated to the Wounded Warrior Project.
Notify me when this product is back in stock. 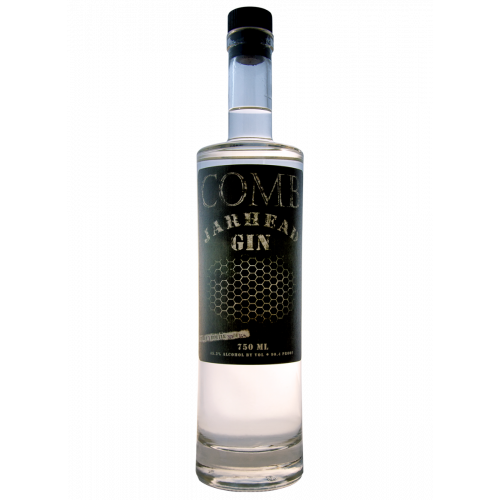 Back in February 2011, Ed Tiedge, a former Marine and the master distiller at StilltheOne Distillery, was busy putting the finishing touches on another run of Comb 9 Gin when his phone rang. On the line was a volunteer from the Wounded Warrior Project, asking him to donate some of his gin for an auction to benefit wounded soldiers. Ed agreed without hesitation, before realizing he could do a whole lot better. Rather than just donate a few bottles of the gin he had on hand, Ed turned back to his copper pot still and got to work on an entirely new gin that would serve as a tribute to the injured troops. When he had finished, he was left with a case of twelve bottles of new gin: Comb Jarhead Gin, named as a nod to the Marines, with whom he so proudly served.

With the original case long gone, Tiedge realized he created something unique and decided to create more batches of Jarhead Gin. Made in the same painstaking fashion as the first case, each bottle of Jarhead Gin is hand-numbered with its batch and bottle number and remains a tribute to the troops. Aside from the name and packaging that honors our proud soldiers, StilltheOne donates a portion of the sales of each bottle to the Wounded Warrior Project.

Distilled from a blend of New York State wheat and honey, Comb Jarhead Gin is bright and lively. Tiedge starts with Florida orange-blossom honey — chosen for the distinct flavor that comes from the flower — which he impregnates with yeast for two weeks. Following fermentation, he distills the gin in a custom-made copper pot still that he engineered with a friend. Although the exact recipe remains classified, Jarhead Gin is made from a number of fresh botanicals, including coriander, fresh citrus, ginger and juniper.

Toast the troops with a bottle of Comb Jarhead Gin!

Notes of citrus, ginger and coriander jump through the juniper.