This product is available in: CT, DC, NJ, TX Unfortunately, we can't ship to PO Boxes and APO addresses.

Size50 mL Proof60 (30% ABV)
Crafted with Jameson's signature triple-distilled flagship Irish whiskey, this flavored expression adds a zestiness to the profile with natural orange flavor. Bottled at 60 proof, it's a balanced and fruity expression with a solid whiskey backbone.
Notify me when this product is back in stock.

This product is available in: CT, DC, NJ, TX Unfortunately, we can't ship to PO Boxes and APO addresses. 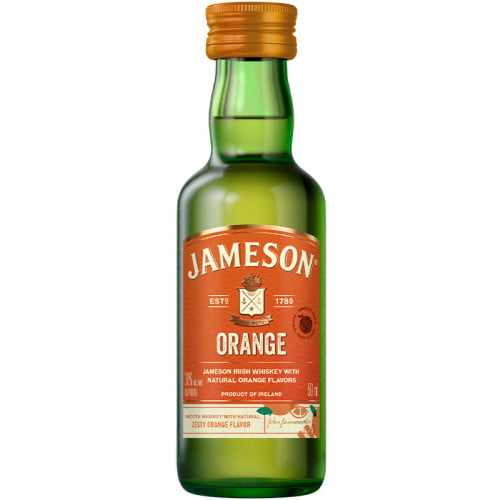 Released in 2022, Jameson Orange is a new addition to their core lineup. It combines their triple-distilled flagship whiskey with natural orange flavor. Paired with the whiskey's signature smoothness, the orange brings a citrusy and zesty fruitiness to the profile, resulting in a balanced and versatile expression that can be sipped neat, on the rocks, or used to craft delicious cocktails. Jameson Orange is bottled at 60 proof.

Get your bottle of this orange-flavored whiskey today!

Orange zest and fresh orange aromas greet the nose with a solid sweet whiskey backbone. The palate is delicate and full with orange, spice, nuttiness, and sweet vanilla. The finish is clean and sweet with lingering orange.