$45.99
Caskers Rewards members earn up to 2 store points back when buying this bottle.

This product is available in: NV, NY, TX Unfortunately, we can't ship to PO Boxes and APO addresses.

Size750mL Proof80 (40% ABV)
Distilled in the Rocky Mountains at an elevation of 7,000 feet, Vodka 7000’ earned a 92-point rating from Tasting Panel Magazine, and was “Highly Recommended” by Paul Pacult’s Spirit Journal.
Notify me when this product is back in stock.

This product is available in: NV, NY, TX Unfortunately, we can't ship to PO Boxes and APO addresses. 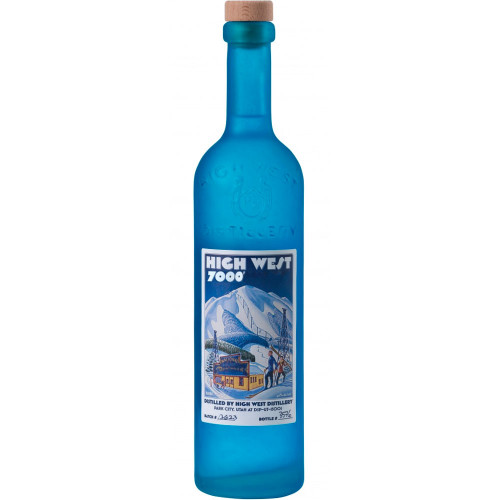 Situated at the bottom of the Quitting Time Ski Run in Park City, High West Distillery & Saloon is the first distillery in Utah since Prohibition and the only ski-in gastro-distillery in the world. “We wanted to call High West a ‘saloon’,” says David Perkins, High West's founder, “because we wanted to pay homage to the history of saloons in the old West and the important role they played in each and every town that had one. The saloon was the main meeting place where town hall was held, important announcements were made, and people went to eat and drink. We want people to share that sense of community and friendship over High West.”

7000’ is the exact elevation of High West Distillery’s saloon. High West Vodka 7000’ pays tribute to the distillery’s high-altitude locale, as well as the many unique attributes which make High West spirits so special. The vodka, which is copper pot-distilled from carefully-sourced oats, is brought to proof using snowmelt from the mountains — naturally filtered in deep rock aquifers, this water contributes immensely to the vodka’s rich flavor.

High West Vodka 7000’ has a creamy aroma with notes of orange peel and grapefruit on the palate. The finish is delicate, with hints of toasted oats and sweet toffee.

Creamy aroma with notes of orange peel and grapefruit on the palate. The finish is delicate, with hints of toasted oats and sweet toffee.