$12.99
Size1420mL Proof0 (0% ABV) *Please note that the ABV of this bottle may vary
This all-natural carbonated drink contains no sugar and can serve as a zero-proof aperitif or as a light mixer that pairs well with wine or spirits. The versatile drink is refreshingly zesty, vegan, and gluten-free with only 5 calories per can.
Notify me when this product is back in stock. 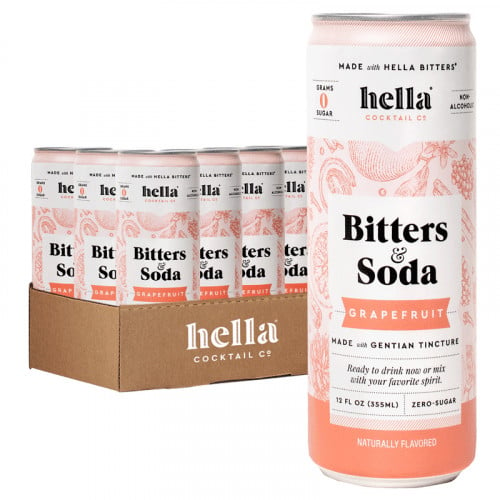 The entire Bitters & Soda lineup of canned drinks has zero sugar, no alcohol, and has plenty of health benefits, being good for digestion and anti-inflammatory. The aperitifs get their refreshing flavor from a gentian tincture from the south of France. Bitters & Soda Grapefruit is equally tasty as a refreshing zero-proof drink or as a mixer that pairs well with wine as well as spirits. As it contains no sugar or gluten and is vegan as well as all-natural, it's a healthy and light option for mixology.

Get your 4-pack of this zesty aperitif-slash-mixer today!

You'll find notes of fresh ripe grapefruit and citrus zest along with allspice and a pleasant bitterness that culminates in a refreshingly bright finish.