Learn more
Size750mL Proof80 (40% ABV) *Please note that the ABV of this bottle may vary
In celebration of summer and the brand’s French roots, Grey Goose has introduced a limited-edition incarnation of its iconic expression.
Notify me when this product is back in stock. 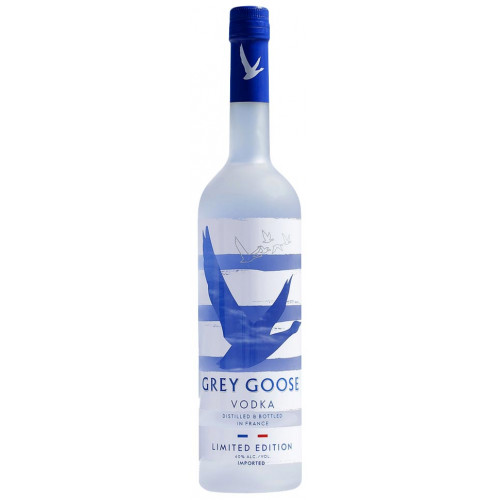 Grey Goose, one of the most notorious luxury Vodka labels, is produced in France. Materialized by Sidney Frank, founder and CEO of the company who developed the idea in the summer of 1996 the French brand was sold to Bacardi in 2004. The original recipe for the vodka was developed by the Maître de Chai for Grey Goose, François Thibault, in Cognac, France. François Thibault, who seamlessly transitioned his skills from cognac to vodka production, oversaw the first vodka ever to be produced in the Maître de Chai tradition.

The water used in production comes from the natural spring, Gensac-La-Pallue, in the Cognac region, filtered through Champagne limestone. Grey Goose is crafted with locally sourced soft winter wheat grown in Picardy (le grenier à blé- the breadbasket of France), a wheat-growing region in France. The grain is sown in October and Harvested in August. This wheat, classified as "superior bread-making wheat,” is the only grain used in Grey Goose. According to Thibault, soft wheat, as opposed to hard wheat, is better for distilling, the four additional months of growth in comparison to summer wheat yields a more durable grain.

Grey Goose’s ingredients are distilled in a facility in the same region. Enzymes are used to break down the carbohydrates into fermentable sugars, and the fermentation takes place continuously over six cascading tanks. The wash is then distilled once into spirit using a five-step process. The water used in the vodka comes from the Gensac-La-Pallue 150 meters below the blending facility in Cognac, which is lined with limestone, providing calcium-rich spring water. The vodka is also filtered through a copper filtration system in order to infuse the vodka with additional flavor. The distillate is sent to a plant in Cognac, France, dedicated to the sole purpose of bottling of Grey Goose. The resultant spirit is cut with spring water and bottled and corked.

In 1998 Grey Goose was named the best-tasting vodka in the world by the Beverage Testing Institute. In that same year Grey Goose was the best-selling premium brand vodka in the US, selling over 1.5 million cases. Made from 100% French ingredients, Grey Goose has several premium vodkas in their core lineup, ranging from flavored expressions- like their La Poire expression which was the result of Thibault's relationship with a Parisian pastry chef, whose pear tarte inspired the recipe for the vodka’s flavor- to special releases, like their Cognac infused VX Vodka.

Grey Goose has also released a number of limited edition expressions including their Riviera Limited Edition. In celebration of summer and the brand’s French roots, they have introduced a limited edition incarnation of its iconic expression, with nautically influenced bottle featuring classic mariner stripes. Bottled at 40% ABV. This vodka has clean and subtle notes of green apple and white blossom from orchard fruits.

On the nose are clean and lively notes of subtle green apple, white blossom from orchard fruits, soft anise and hints of almond cream. The palate is initially soft with a gentle sweetness and light citrus, creamy and harmonious, with a smooth rounded texture and richness of almond. The finish is fresh and bright throughout with a long, satisfying finish.