Size750mL Proof80 (40% ABV)
This oak smoked Vodka is made in small batches — only one to two thousand bottles each time. To achieve this flavor, water is kept in a smokehouse, acting as a sponge, soaking up the smoky flavor. The infused water is then blended with award winning Chase’s award-winning Vodka.
Notify me when this product is back in stock. 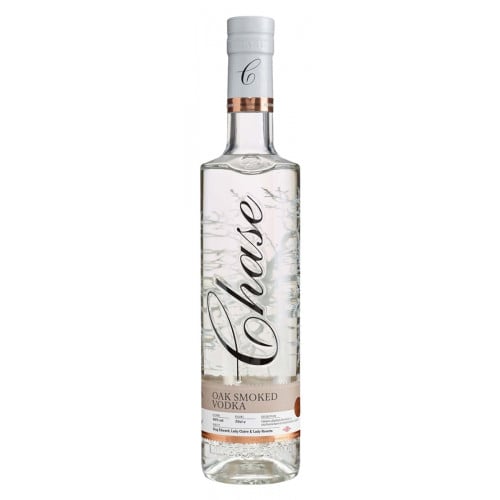 The Chase family comes from a long line of potato farmers and is now in their fifth generation. After going bankrupt in 1996, William Chase — founder of the Chase distillery — decided to take a new direction with their brand, founding Tyrell’s Crisps in 2002, “As Tyrrells grew, I was searching for the next step. In 2004 whilst traveling in the USA, looking for packaging equipment for the chips, I stumbled on a small distillery making potato Vodka and thought this would be a great new chapter to life.”

On April fool’s day in 2008 they harvested their first potatoes, and on June 2008, the Chase family produced their first batch of spirits. Their very first spirit was a potato Vodka, and not long after, they began producing Gins. A large portion of Chase’s lineup is crafted with a potato Vodka base spirit. A large majority of the spirits are also crafted with and apple based spirit. The apples used in production are sourced from the family farm.

The facility houses a bespoke rectifying column. It takes 16 tons of potatoes to produces only 1000 liters of alcohol, which is a testament to the quality of Chase Vodka. Their small batch process yields a great product.

“Our oak smoked Vodka is made in small batches — just one to two thousand bottles each time. We leave water from our borehole in the smokehouse until it picks up a delicate smoked flavor, then blend it with our award-winning Vodka to achieve a sweet, smoky finish.” (Chase Distillery)

An initial peppery haze leads to sweet and creamy oak smoke on the nose. The palate is sweet, with woody notes of liquorice, hints of charcoal with bitterness and spice, followed by subtle oak smoke. The finish is soft with a delicate smokiness.