Size750mL Proof80 (40% ABV)
With the renowned soft winter wheat vodka serving as the base, this flavored expression brings plenty of fruitiness with the essence of ripe French black cherries. It's bottled at 80 proof ― higher than is usual for cherry-flavored vodka.
Notify me when this product is back in stock. 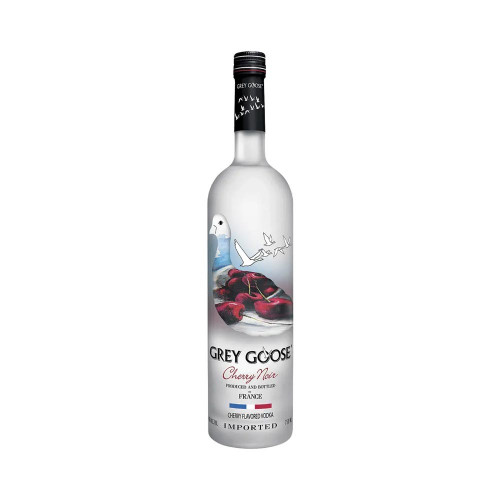 The water used in production comes from the natural spring, Gensac-la-Pallue, in the Cognac region, where it gets filtered through Champagne limestone. Grey Goose is crafted with locally sourced soft winter wheat grown in Picardy known as "the breadbasket of France", a wheat-growing region in France. The grain is sown in October and harvested in August. This wheat, classified as "superior bread-making wheat,” is the only grain used in Grey Goose. According to Thibault, soft wheat, as opposed to hard wheat, is better for distilling, the four additional months of growth in comparison to summer wheat yielding a more durable grain.

Grey Goose has several flavored expressions in their lineup, all of them crafted with their soft winter wheat vodka. Grey Goose Cherry Noir is made with the essence of ripe black cherries from the French Basque Country. It was launched in 2012 and is bottled at 80 proof ― higher than is common for cherry-flavored vodka. Vibrant, dark, and sweet, the expression is rich with cherry notes that work particularly well in various cocktails such as the Cherry Collins.

The vibrant nose has ample fruity notes on the nose with cherry dominating, as well as berries and a touch of strawberry. More cherry is on the palate along with hints of vanilla and a touch of sweetness and spice that linger through the bright finish.