Size2130mL Proof0 (0% ABV)
This soft drink is the no.1 best-selling ginger beer in the US and is the result of a year of experimentation and meticulous testing. Its perfect balance of spiciness and sweetness is crafted to complement Gosling's Black Seal Rum in the original Dark 'N Stormy cocktail.
Notify me when this product is back in stock. 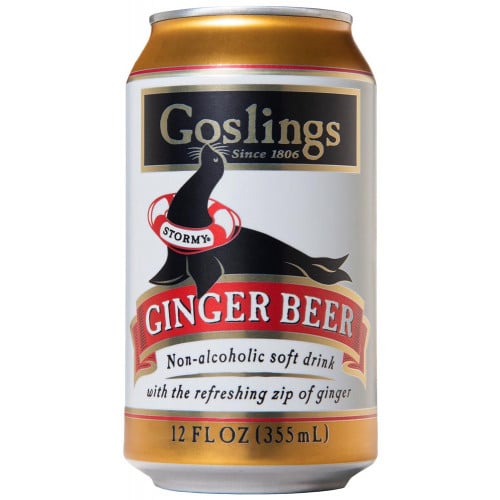 Upon his return to England in 1824 James Gosling opened a shop with his brother Ambrose, which has been in the Gosling family ever since. Their first rum, the Black Seal, was produced nearly half a century later in 1863. Produced in Bermuda, the Black Seal is synonymous with the island. Today, the family business is in the 7th generation of Goslings, who continue to lead the company as the largest exporter of any Bermuda-made consumable product. Gosling’s is also the only company that blends and bottles on the island.

Beside their famous Black Seal Rum, premium Family Reserve expressions, and overproof rums, they offer two quirkier products as well. The first is the Dark 'N Stormy ready-to-drink cocktail and the second is their very own Stormy Ginger Beer. The latter was created in 2009 after a year of experimentation and meticulous tasting to achieve the perfect balance of sweetness and spiciness. Mix it with their Black Seal Rum for the original Dark 'N Stormy cocktail or use it in a delicious Moscow Mule.

Grab a can today!

The cloudy straw-colored ginger beer has the perfect balance of sweetness and spiciness. Its profile is spicy and citrusy with lemon zest, ginger, meringue, and turmeric. Finishes tingling and long.