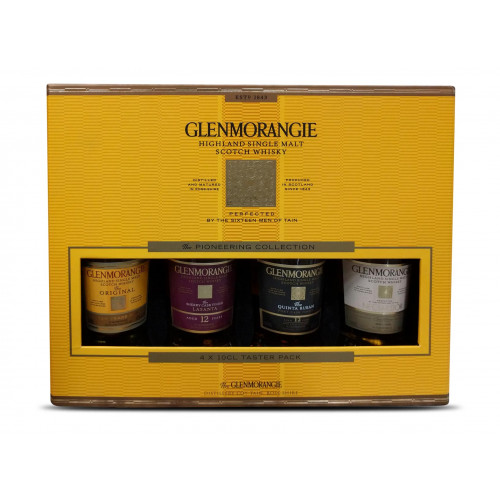 Glenmorangie 10 Year Original was matured for ten years in a range of ex-bourbon and signature slow-grown, air-dried 'designer casks' from Missouri. This whisky features a balance of sweetness and complexity. This spirit is an old soul, with its soft, mellow and creamy flavors, this single malt won Gold medals at the 2016 IWSC and SFWSC.

LaSanta 12 Year is an elegant, voluptuous whisky that was matured in American white oak ex-bourbon casks before being extra-matured for a further two years in Oloroso and PX Sherry casks from Jerez, Spain. Lasanta is Gaelic for warmth and passion, which is a wholehearted reflection of this expression's compelling character. This sophisticated dram won "Best Highlands Single Malt" at the 2017 WWA and a Gold medal for "Best Single Malt 12 Years Old" at the 2017 IWC.

Quinta Ruban 12 Year spent ten years maturing in American white oak casks, before being transferred into a special selection of ruby port pipes from the Quintas or wine estates of Portugal. Extra maturation in these port pipes yields an intricate balance of sweet and dry flavors of dark mint chocolate, tangerines, spicy-nutmeg, and sandalwood. This beautiful flavor profile earned the whisky Gold medals at the 2016 IWSC, and 2017 ISC.

Nectar D’or 12 Year is a sterling example of when can be achieved with a harmonious balance between French casks and Scotch whisky. This single malt was finished in hand-selected wine barriques sourced from Sauternes, the most famous sweet wine growing region of France. Nonchill-filtered, this decadent whisky also won a Double Gold Medal at the 2017 SFWSC.

Get your gift pack today!

Glenmorangie 10 Year Old Aromas of citrus and ripening peaches softened by vanilla. On the palate are flavors of vanilla followed by a burst of flowery fruitiness. The finish is clean, with hints of orange and peach.

Glenmorangie Quinta Ruban 12 Year Old Aromas of dark mint chocolate, tangerines and Seville oranges mingle with sandalwood and walnut, pepper and nutmeg. The palate is velvety with mint chocolate and walnuts, Turkish delight and sweet Seville oranges. The finish is long lasting with a silky aftertaste of dark chocolate mints and traces of orange.

Glenmorangie Nectar D’or 12 Year Old Lime, orange rind, sultanas, dates, spices of coconut and nutmeg on the nose. On the palate; ginger, nutmeg and toasted almonds bring a deep, warming taste interwoven with a syrupy lemon meringue and honeycomb middle. The finish is long and lusciously sweet with lemon zest, white chocolate, vanilla and traces of ginger and nutmeg.